Here are our data processing steps for microbiome data analysis with the package:

Note: Steps 1 and 2 can be swapped as the prefiltering is based on a percentage of total counts.

We give an example in the FAQ to extract the data from the phyloseq package.

Here we use the Koren data set as a working example for pre-filtering and normalisation as the first step in data analysis, using our mixOmics framework for microbial communities analysis mixMC [1]. Whole genome sequencing data can be also processed similarly to what is proposed here. For 16S data, we analyse the taxa at the OTU level, but we can report the results at the family or species level after OTU selection (see examples in the Tab).

The Koren.16S data set includes 43 samples from three bodysites (oral, gut and plaque) in patients with atherosclerosis, measured on 980 OTUs [2]. The data are directly available from the mixOmics package:

We also have various meta data information on the OTUs and the samples:

In this example we have already added an offset of 1 to all data (i.e. data.raw = raw counts + 1). It may not be the case for your own data. This offset is necessary as we will later log transform the data (as log transformation does not like zeroes!). Note that the offset will not circumvent the zero values issue, as after log ratio transformation we will still have zero values.

This is a pragmatic step to handle log transformation on zeroes, but feel free to use different approaches.

We load the offset count data:

We use a pre-filtering step to remove OTUs for which the sum of counts are below a certain threshold compared to the total sum of all counts. The function is given below, and was adapted from Arumugam et al. (2011) [3].

We first load the function:

Then run this function on the data. Before you apply this function, make sure that you have your samples in rows and variables in columns!

In other examples (see [1]) we started from 43,146 OTUs and ended with 1,674 OTUs after pre-filtering. While this pre-filtering may appear drastic (and is highly dependent on the bioinformatics steps performed beforehand, such as OTU picking), it will avoid spurious results in the downstream statistical analysis. Feel free to increase that threshold for your own needs, or not use it at all if you prefer.

An extra step we recommend is to check how heterogeneous our library sizes are per sample. Here we calculate the sum of all counts per sample, and represent the values in a barplot. 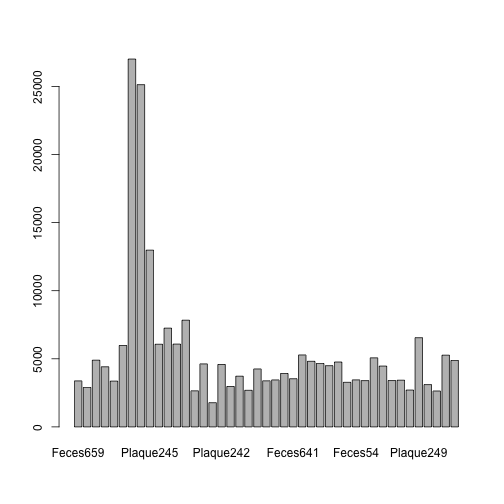 We want to ensure that the number of counts for each sample is 'relatively' similar and that there are no obvious outlier samples. Those samples may also appear as outliers in PCA plots downstream. However, as for any sample outlier removal, ensure that you have a good reason to remove them!

Microbiome data are compositional, because of technical, biological and computational reasons. Researchers often calculates proportions from the data, using Total Sum Scaling. Proportion data are restricted to a space where the sum of all OTU proportions for a given sample sums to 1. Using standard statistical methods on such data may lead to spurious results. Likewise, any data that are compositional in nature (such as microbiome) are interpreted into relative counts.

Transforming compositional data using log ratios such as Centered Log Ratio transformation (CLR) allows us to circumvent this issue as proposed by [4]. The CLR is our transformation of choice in mixOmics.

Note: as the CLR already divides each count by the geometric mean, it does not make a difference whether we apply TSS + CLR, or CLR on the count (filtered) data directly. This is why we are skipping the TSS step here.

Note: The argument offset is not necessary here, as we went from raw counts, to offset. But there are cases where you may not have access to raw counts but instead TSS data calculated on raw counts, with no offset. The presence of zeroes will make the log-ratio transformation impossible. In this case, you can add a 'tiny' offset using this argument.

Now you are ready

Let's do our first PCA, using either the argument logratio = 'CLR' in PCA: 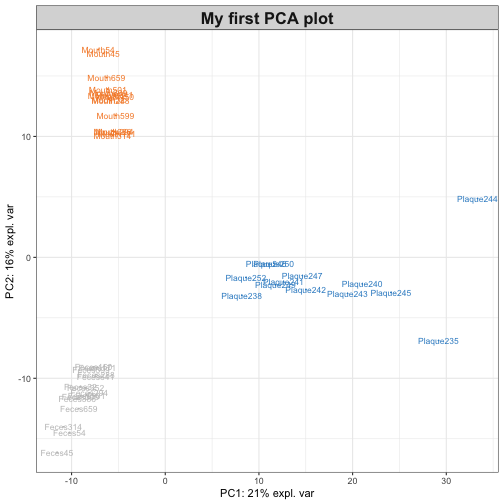 Or using the CLR data calculated with the log.ratio function. The results should be the same as earlier: 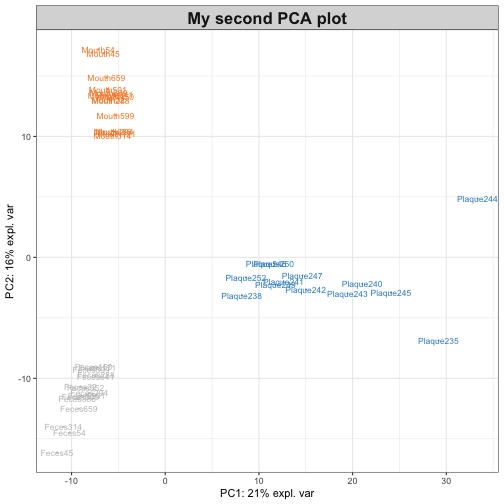 We can clearly see from this plot that two samples stand out. They correspond to those with a large library size despite a scaling (CLR) step.

Can I apply another method (multivariate or univariate) on the CLR data?

In that case you can use our external function logratio.transfo, see ?logratio.transfo. Make sure you apply it to the data.raw +1 first, it will be easier than having to add a small offset by using the logratio.transfo function. The log ratio transformation is crucial when dealing with compositional data!, unless the compositional nature of the data is accounted for directly in the statistical methods. See also the reference [5].

Help! I have a phyloseq object!

We explain below step by step how to extract the data in the right format from phyloseq. This code was written by Ms Laetitia Cardona from INRAE (thank you!) 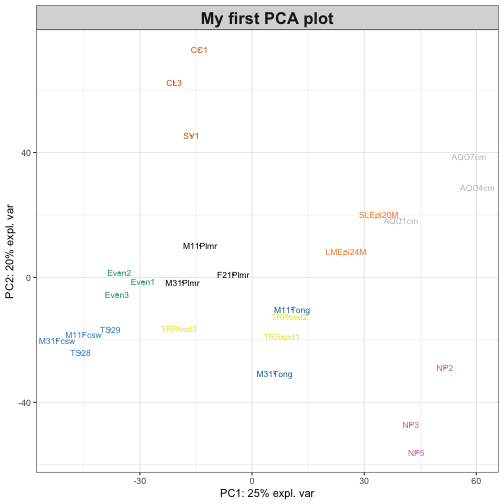 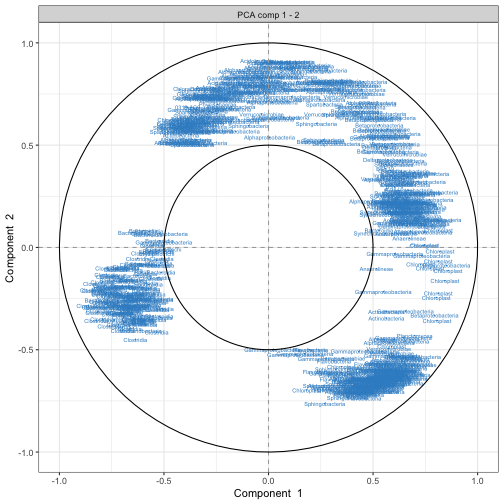 CSS normalisation was specifically developed for sparse sequencing count data by Paulson et al.. CSS can be considered as an extension of the quantile normalisation approach and consists of a cumulative sum up to a percentile determined using a data-driven approach. CSS corrects the bias in the assessment of differential abundance introduced by TSS and, according to the authors, would partially account for compositional data. Therefore, for CSS normalised data, no log-ratio transformation is applied as we consider that this normalisation method does not produce compositional data per se. A simple log transformation is then applied.

We give below the R script for CSS.