In this case study, the functionality of the multiblock sPLS (MB-sPLS) framework will be outlined and explored. MB-sPLS is the N-integrative form of the sPLS method, such that there are more than two sets of quantitative data that were measured across the same subjects.

This vignette will use the gastrulation data yielded by Ricard et al. 2019 [1]. Unlike most other data used in case studies on this site, it is not found within the mixOmics package. The study the data is drawn from aimed to combine genomic, transcriptomic and epigenomic profiles from single cells in an effort to determine the nature of developmental and disease cell biology.

The data set (which can be downloaded here) contains the following:

Prior to tuning and fitting a MB-sPLS model, the datasets should be explored in a pairwise manner. While the focus is understanding how the two explantory datasets relate to the RNA data, the relationship between the methylation and accessibility datasets is important to assess. These pairwise comparisons can be seen in Figure 1. Note that there were only 25 features from each dataframe selected and features with a correlation value lower than 0.5 were removed from the plot.

Observing Figure 1(a), it seems that the selected RNA features are all positively associated with the first component. There are a few methylation features that are highly correlated with these, but most are negatively associated with the first component. The opposite of this is the case when looking at the relationships between the RNA and accessibility features (Figure 1(b)). The methlyation and accessibility features are highly negatively correlated with on another as can be seen in Figure 1©. 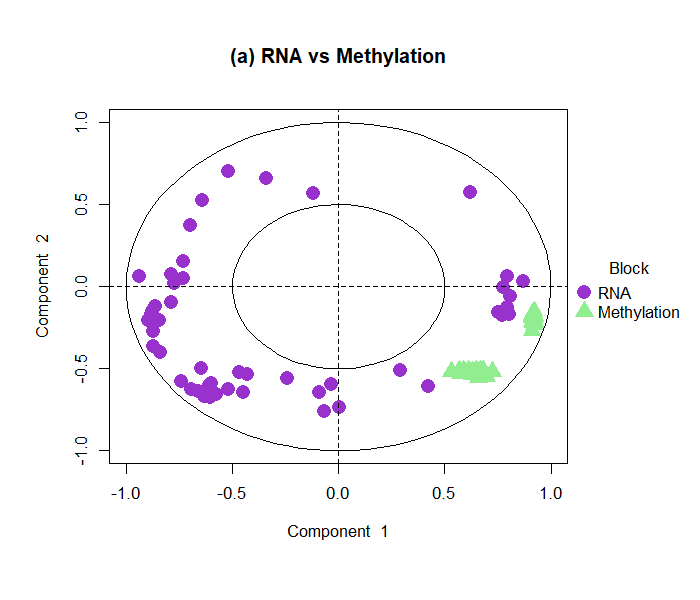 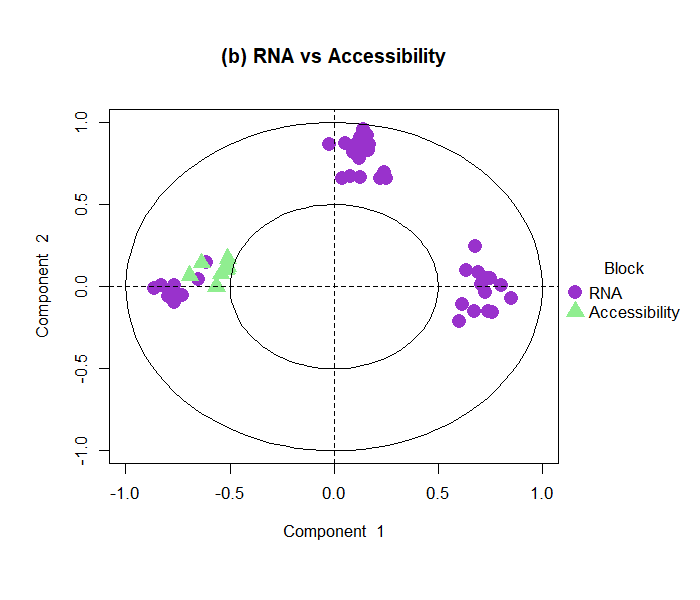 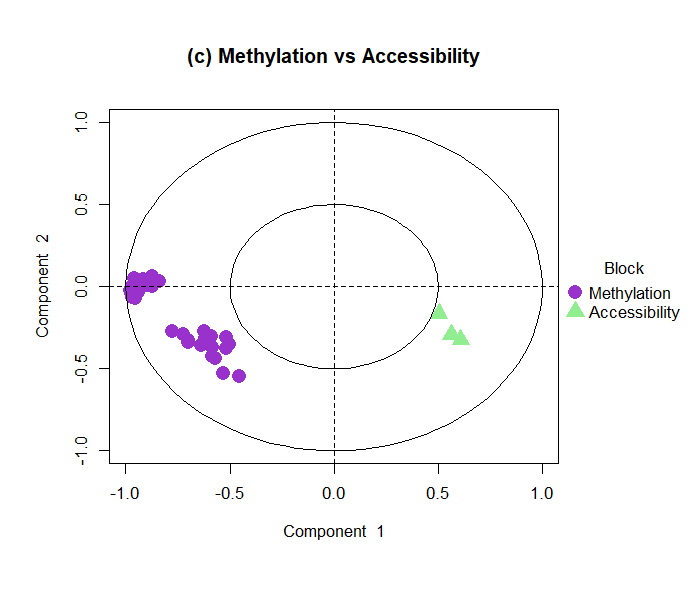 FIGURE 1: Circle Correlation Plots for pairwise PLS models on the gastrulation data. Only displays the top 25 features for each dimension, subsetting by those with a correlation above 0.5.

As discussed in the N-Integration Methods page, the “design” of the model needs to be created with the type of relationships to be explored in mind. Based on the correlation values seen above, a full design of value 0.5 will be used. In reality, there would be more exploration and tuning involved in forming this design matrix.

With a design in place, the initial MB-sPLS model can be generated. An arbitrarily high number of components (ncomp = 5) will be used.

Unfortunately, there are not yet methods within mixOmics which allow for the tuning of block.spls objects. Hence, the number of of components (and features per component) to use cannot be determined experimentally as in all the other case studies. If tuning is necessary, manually undergoing repeated cross-validation, assessing the regression's Mean Squared Error (MSE) and \(R^{2}\) scores as components are added, is the way to achieve optimal parameter values.

For simplicity within this vignette, arbitrary values will be selected and can be seen below.

Using these selected parameter values, the final MB-sPLS model can be constructed.

Now that the model is formed, visualisation is possible. First, the projection of the samples onto the novel components is plotted and can be seen in Figure 2. The samples are coloured by their lineage and symbols are used to denote the stage of that sample. Note that these factors (lineage and stage) were not taken into account to form the model. They are used purely for visualisation. Also note that only the RNA block is shown (blocks = 1), though three were produced. The other two plots are fairly noisy and don't contain as much information as Figure 2. However, this plot would benefit greatly from further optimisation and parameter tuning.

Lineages such as the primitive endoderm are very well separated from the other lineages by the first two components. Others do not separate as well. It is interesting to see the similarity of samples taken from the visceral endoderm and the normal endoderm, irrespective of the stage of the sample. This goes to show the relatedness of these tissues from a RNA expression perspective. This is also the case for all those lineages found in the large cluster on the left, including the epiblast, primitive streak and mesoderm. 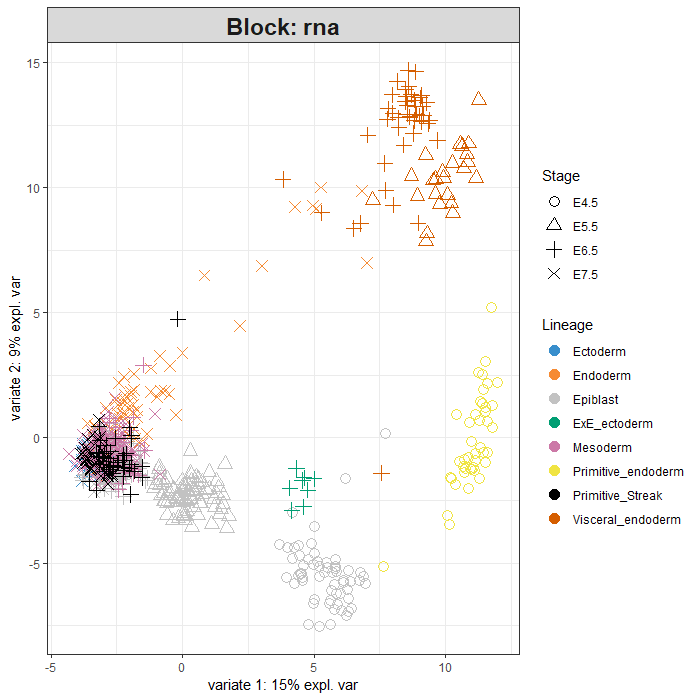 FIGURE 2: Sample plot for sPLS2 performed on the gastrulation data. Samples are projected into the space spanned by the components yielded from the RNA dataset.

The plotArrow() function is very useful in multiblock contexts. The similarities and discrepancies between a given sample across the three datasets can be seen (refer to the legend). Samples deriving from the primitive endoderm are fairly similar across all three component spaces, as seen by the short arrows. Compare this to the ectoderm samples which have very long arrows indicating that there is large discrepancy between the projection of these samples in the three different spaces. One could potentially say that the RNA expression and methylation are more closely linked in tissues such as the primitive endoderm when compared with the ectoderm.

Note that this plot was made with a random subsample (of size 30) as using all samples yielded an impractical plot due to the sheer quantity of arrows. 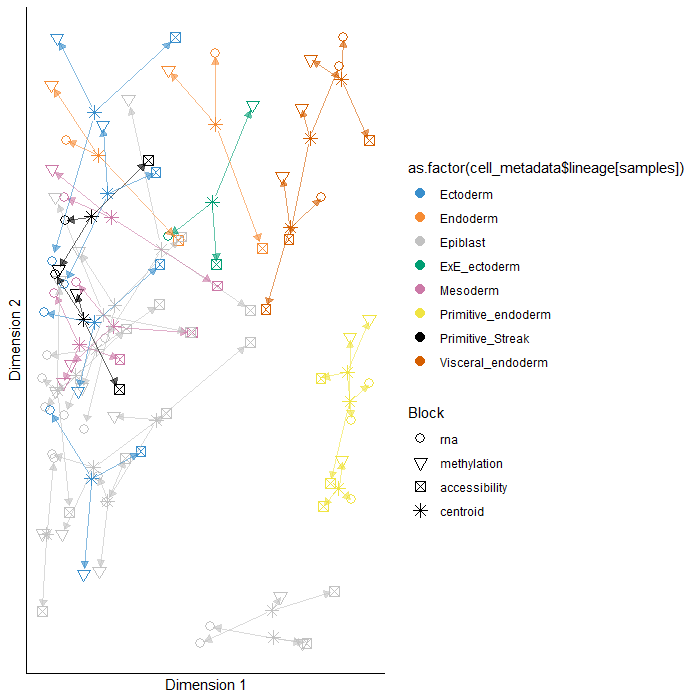 FIGURE 3: Arrow plot from the sPLS2 performed on the gastrulation data. The star indicates the location of the centroid of a sample across all the three datsets. The tip of each arrow shows the location of that same sample in the space spanned by the components associated to a specific dataset.

Another extremely useful plot in this context is the correlation circle plot. This can be seen in Figure 4, where features from each dataset are plotted according to their association with the first two sPLS components. Save for the few RNA features which have high similarity with the accessibility features, each dataset's features cluster with themselves. The majority of RNA features and all accessibility features are negatively correlated with the methylation features interestingly. It also seems that the first component is much more discriminating than the second. 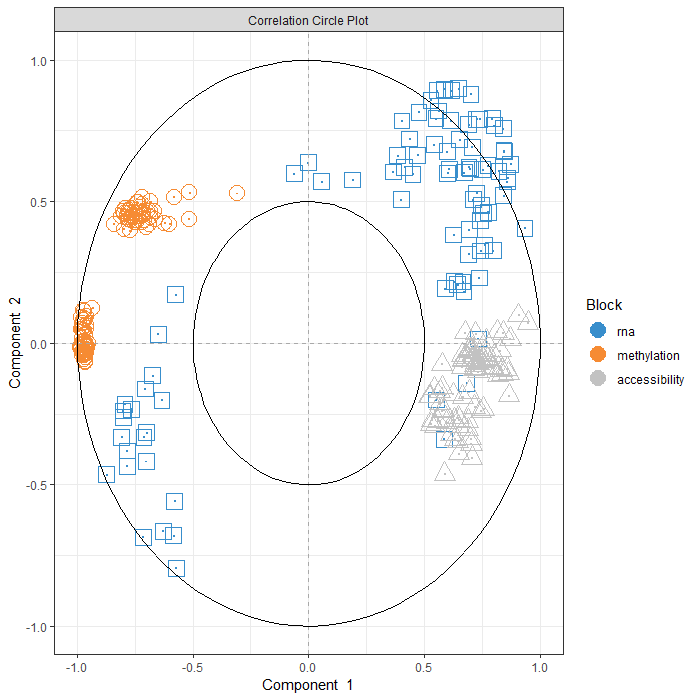 FIGURE 4: Correlation circle plot from the sPLS2 performed on the gastrulation data 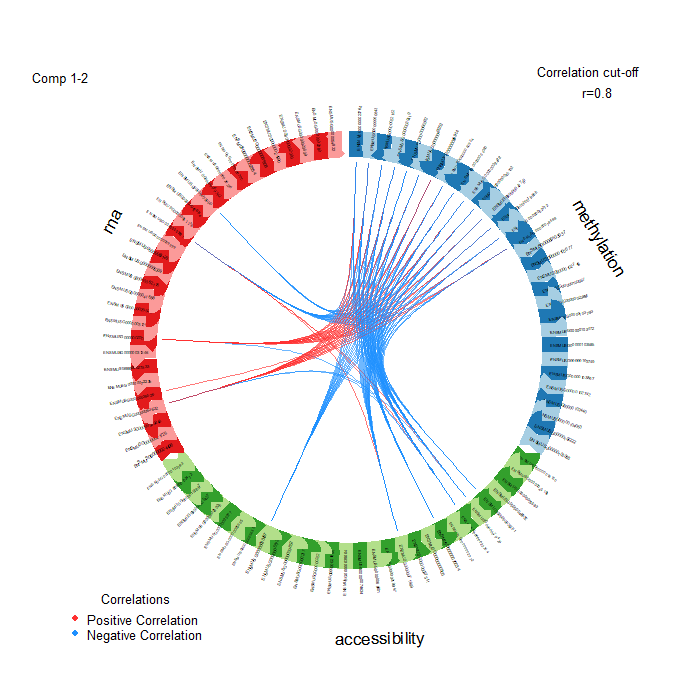 FIGURE 5: Circos plot from multiblock sPLS performed on the gastrulation data The plot represents the correlations greater than 0.8 between variables of different types, represented on the side quadrants