Independant Principle Component Analysis (IPCA) is an extremely useful tool when standard PCA is limited, usually induced by large quantites of noise in the dataset being analysed. This case study will draw many parallels to the process in the PCA Multidrug Case Study. Choosing IPCA over PCA requires an understanding of the variation structure of the data under inspection.

For background information on the (s)IPCA method, refer to the IPCA Methods Page.

Load the latest version of mixOmics:

The liver toxicity dataset was generated in a study in which rats were subjected to varying levels of acetaminophen (Bushel et al., 2007).

To confirm the correct dataframe was extract, the dimensions are checked:

When to choose IPCA over PCA

One of the primary reasons to use IPCA rather than PCA is when the data does not follow a Gaussian distribution. Figure 1 shows that when undergoing a Shapiro-Wilk test (the null hypothesis being that the data is distributed normally), nearly half of the 3116 features are unlikely to be distributed in a Gaussian way. This would violate the assumption of normality PCA has, hence making IPCA a more appropriate choice. 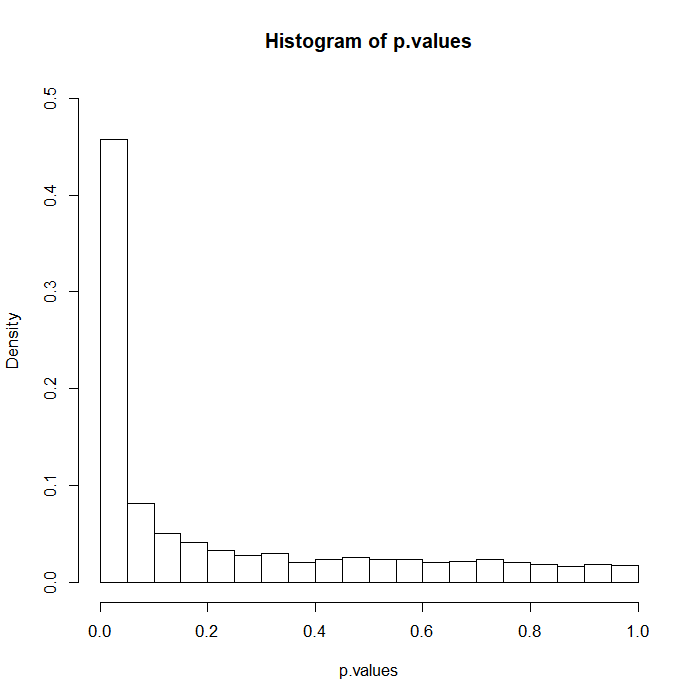 FIGURE 1: Histogram depicting the distribution of p-values generated by running a Shaprio-Wilk test on each feature in the liver toxicity gene dataset. The large value <0.05 indicates that there are many features which are significanly unlikely to be distributed normally.

As in the sPCA Case Study, a basic model is formed first to inspect the data prior to any sort of tuning. This will aid in the tuning process down the line. 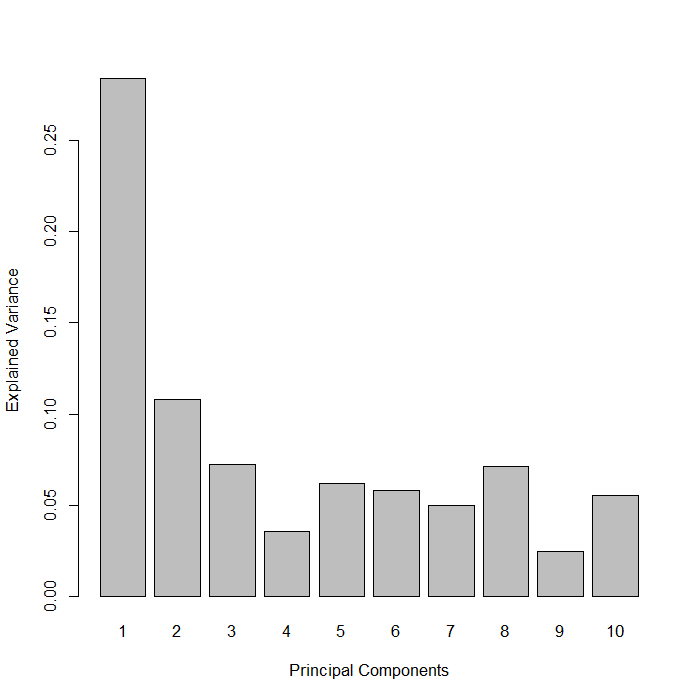 Note that Figure 2 is not a strictly decreasing plot (as in the equivalent plot in the PCA Multidrug Case Study). Components are not generated based on maximisation of explained variance but maximal reduction in noise. It seems from Figure 2 that the first component explains a high proportion of the variance observed in the data.

By default, the data will not be scaled at all (scale = FALSE). Generally, it is advised that scaling to unit variance be done with the data, especially in cases where there is inhomogeneity in variance across the variables.

The number of IPCs to select is an open issue. Rather than using the explained variance, the Kurtosis value can be used. The 'elbow' method is still applicable on the Kurtosis values. This is accessed via ipca.Object$kurtosis. The kurtosis value is described in more detail below. Figure 3 shows that three components is an appropriate choice. 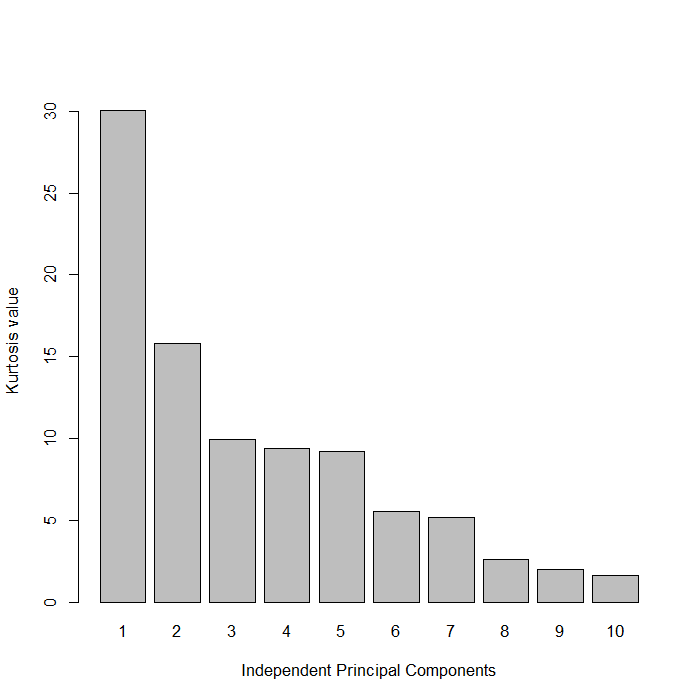 sipca() uses the same keepX parameter as spca() resulting in the same difficulty in selecting the number of variables to be used for component construction. The Davies Bouldin index is a measure that has been used to optimise this decision (Yao et al., 2012). User experimentation with different values for keepX and their resulting Davies Bouldin index is recommended. This index is also explained in depth further below.

As there is no implementation of a tune.sipca() function within mixOmicswhich utilises this measure, it would need to be done manually. It is recommended to use the index.DB() function from the clusterSim package. For this case study, 50 features will be used for each component.

Using these tuned parameters, the final model can now be run to yield an optimised sIPCA visualisation. 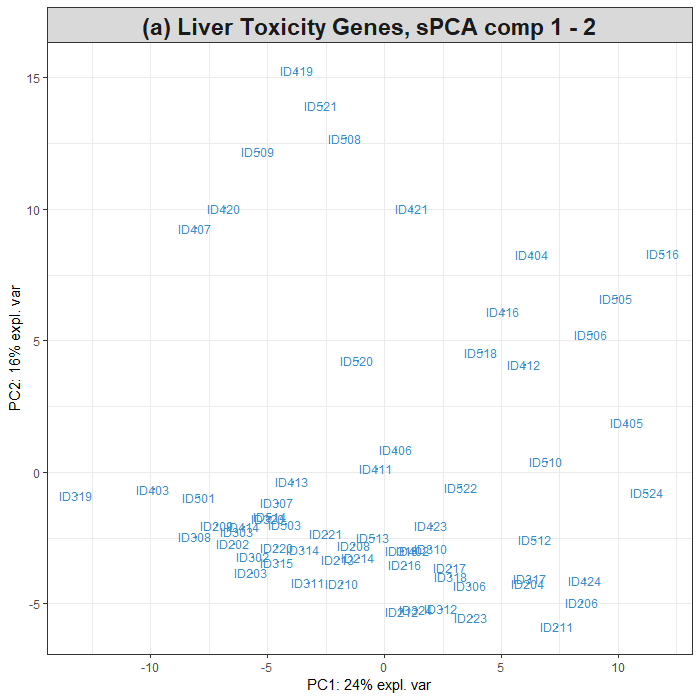 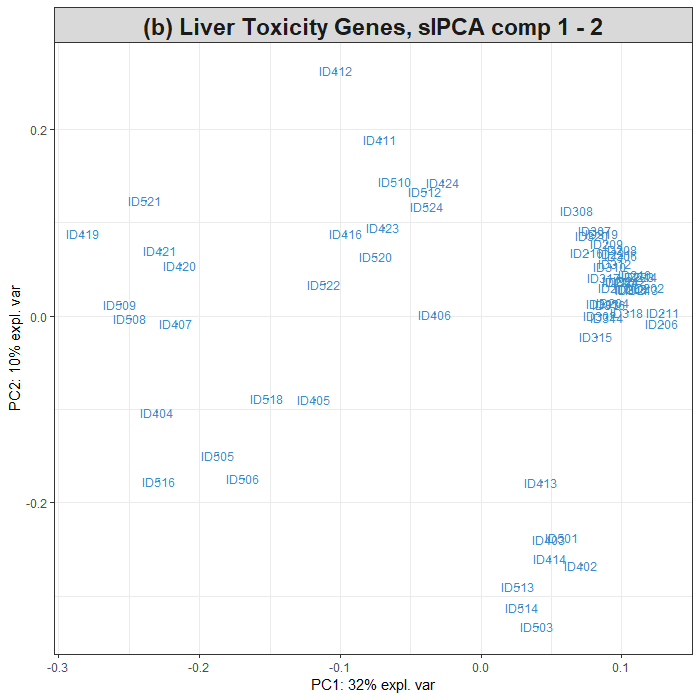 FIGURE 4: Sample plot from the sPCA (a) and sIPCA (b) performed on the liver toxicity gene data.

Sample projections onto the first two components from the equivalent sPCA and sIPCA outputs can be seen in Figure 4 (a) and (b) respectively. Seeing as are multiple response variables in the liver.toxicity data, the samples were not coloured. The output from sPCA (a) was included to depict the improved clustering seen in sIPCA (b) on this sort of data. 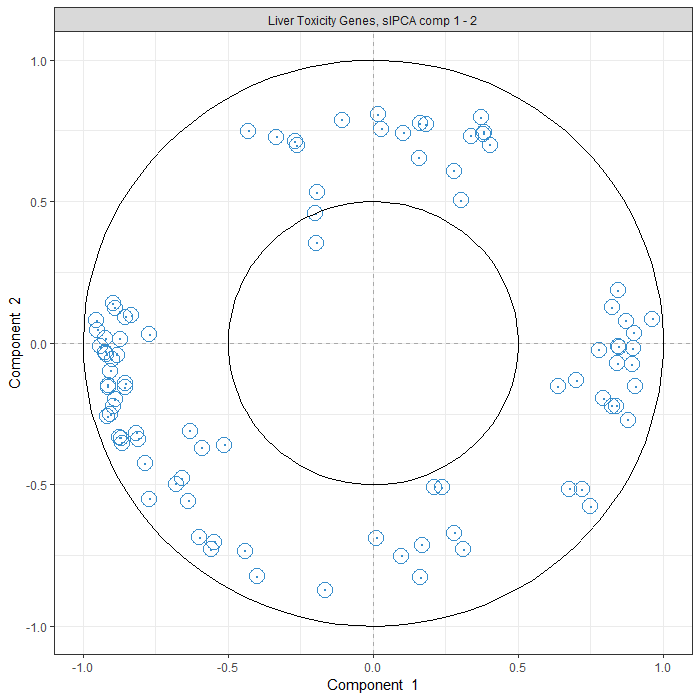 FIGURE 5: Correlation circle plot from the sIPCA performed on the Liver Toxicity genedata. Only the gene genes selected by the sIPCA are shown on this plot.

The correlation circle plot can be seen in Figure 5. Clustering of the gene expression features are shown – it seems as if there are about four clusters. From Figure 5, it can be observed that all the selected features were large contributors to the first two Independent Principal Components.

It has been shown that the kurtosis value is a good post-hoc indicator of the number of components to choose, as a sudden drop in the values corresponds to irrelevant components.

This value is the ratio of the intracluster (within-cluster) scatter and intercluster (between-cluster) scatter. Low values indicate good clustering, such that points within one cluster are tight and differing clusters are well-defined from one another.