Partial Least Squares (or Projection to Latent Space – PLS) and its sparse variant (sPLS) is a linear, multivariate visualisation technique for integratable datasets. It overcomes the shortcomings of related methods, such as PCA and CCA, in various Omics contexts. In this case study, a PLS2 method will be used. Most of the concepts and procedures explored are applicable in a PLS1 context.

This case study will use a PLS2 framework. To read an example of a PLS1 methodology, click here.

The liver toxicity dataset was generated in a study in which rats were subjected to varying levels of acetaminophen [3].

Both datasets should be explored prior to any form of analysis. This will aid in making decisions in constructing the best model possible. PCA is an unsupervised, exploratory method that is useful here. When using PCA on these datasets, both should be centered and scaled due to the varying scales of each variables (especially the Y dataframe). It is preferable to first run a PCA with a large number of components (i.e. ncomp = 10). Then, use the ‘elbow’ (a sudden drop) on the barplot to choose the final number of PCs. Further information can be found in the PCA Methods Page. 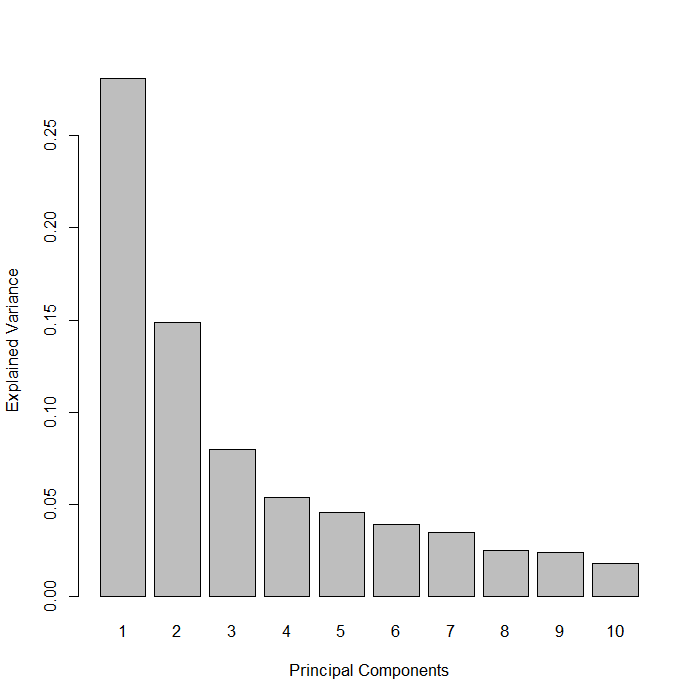 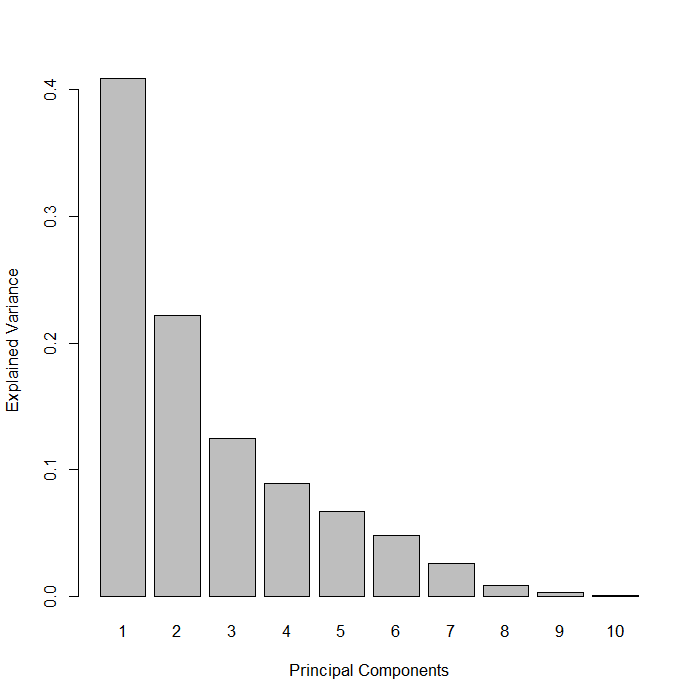 FIGURE 1: Barplot of the variance each principal component explains of the liver toxicity data.

The explained variance of each Principal Components for both datasets can be seen in Figure 1. In both cases, use of the 'elbow method' indicates two components would be sufficient. Beyond this, the added components provide little novel information. The next step is to assess the clustering of samples in the Principal Component subspace. 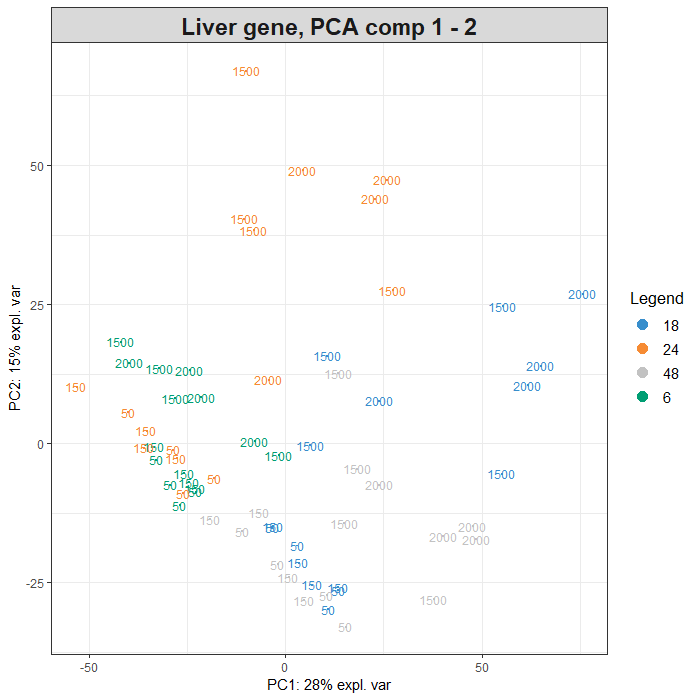 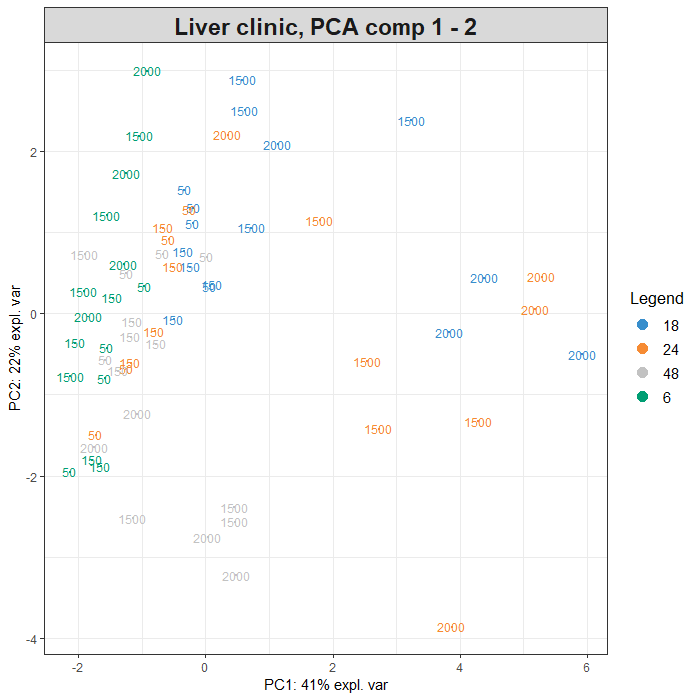 From Figure 2, the samples do not cluster by their dosage or by the time exposure. While this does not provide direct information about the data, it can be inferred that neither of these treatment features are the primary factors in separating different groups of samples.

A basic sPLS model needs to be created such that it can be optimised and tuned.Note that as no keepX or keepY parameters are passed into the function, it is equivalent to the pls() function for now. The regression mode of sPLS is used as the gene expression data is being attempting to be used to explain the clinical data.

The number of components can be reduced from 10 to a much more appropriate value. As with most other methods in mixOmics, this is done through the perf() function. Here, a repeated cross-validation procedure it utilised (10 folds, 5 repeats). When using this function on either a pls or spls object, an appropriate criteria to use for optimisation is the \(Q^2\) measure, which has been extended to PLS (Wold, 1982; Tenenhaus, 1998). Others (including the mean squared error of prediction (MSEP) and \(R^2\)) are acccessable through the resulting object. The \(Q^2\) measure is explained in the 'Addition Notes' section below. 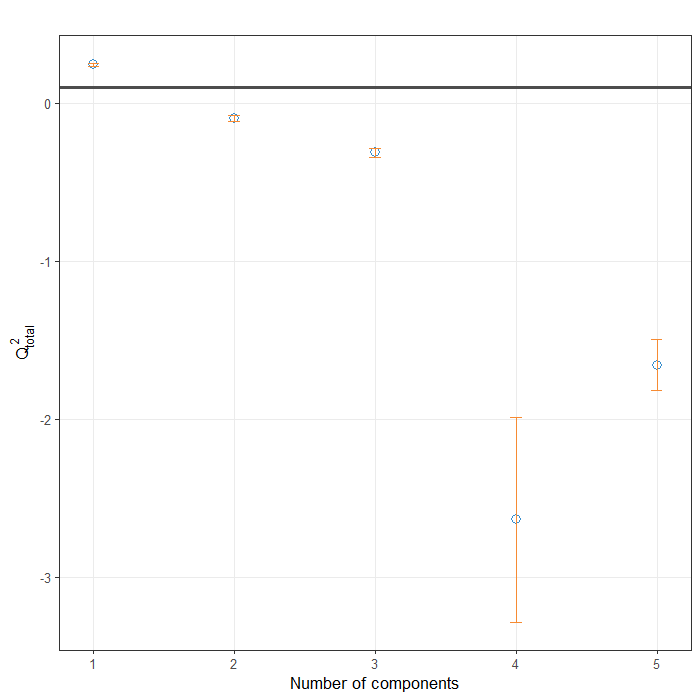 FIGURE 3: Tuning the number of components in PLS on the liver toxicity data. For each component, the repeated cross-validation (5 × 10−fold CV) $Q^2$ score is shown. Horizontal line depicts $Q^2$ = 0.0975. The bars represent the variation of these values across the repeated folds.

The output of the component number tuning can be seen in Figure 3. It contains a horizontal line at \(Q^2\) = 0.0975 which indicates the recommended cut off for dimension selection. Components with \(Q^2\) values lower than this are unlikely to improve the model. In this example, of the first five latent components, the first alone would be sufficient. Hence, it seems that one latent variate is sufficient.

In a multivariate (PLS2) analysis, MAE or MSE are not appropriate as they do not scale well across multiple response variables. Also, the number of variables from Y must be selected. There are two evaluation metrics in the PLS2 context: the correlation (measure = "cor") between predicted and actual components and the residual sum of squares (measure = "RSS") between predicted and actual components. In optimal cases, the former is maximised, while the latter is minimised. Note, RSS gives more weight to large errors and is thus sensitive to outliers. It also intrinsically selects less features on the Y dataframe than the correlation measure. 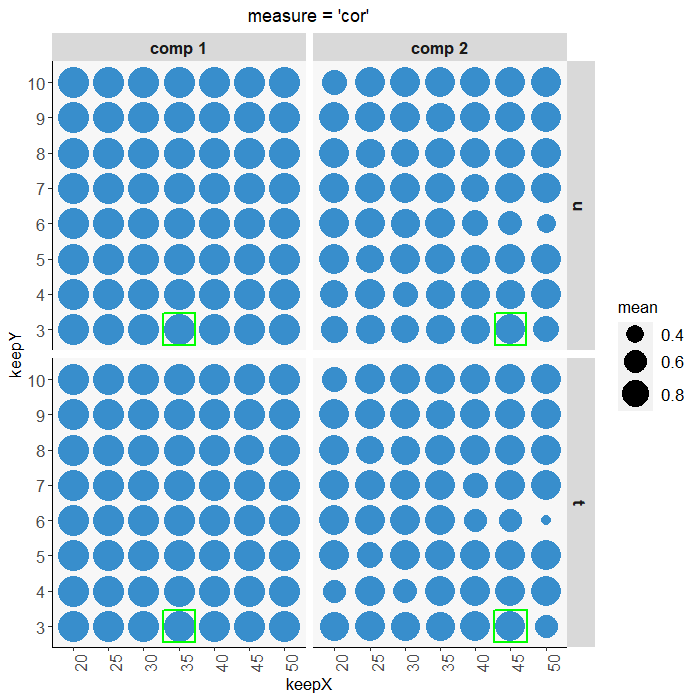 The output of this tuning can be seen in Figure 4. For every grid value of keepX and keepY, the averaged correlation coefficients between the t and u components (latent variables) are shown across repeated cross validation folds. The value is depicted by circle size. Optimal values (here corresponding to the highest mean correlation) for each dimension and data set are indicated by the green square.

The optimal number of features to use for both datasets can be extracted through the below calls.

These values will be stored to form the final model.

Using the tuned parameters generated above, the final sPLS model can be constructed.

The plotIndiv() outputs in Figure 5 and Figure 6 highlights the patterns in the two data sets (gene and clinical). Individual plots can be displayed on three different subspaces spanned by the: X variates, the Y variates or the mean subspace in which coordinates are averaged from the first two subspaces (Figure 5(a), (b) and Figure 6 respectively). This output shows that the time of necropsy has a larger effect than the quantity of acetaminophen consumed. Compared with individual variable PCA plots above, sPLS differentiates between the low and higher doses of acetaminophen and time of nercropsy on each dimension.

While sPLS is an unsupervised approach and does not take into account the classes of the samples in the model, the graphs below have their samples categorised to better understand the similarities between samples. 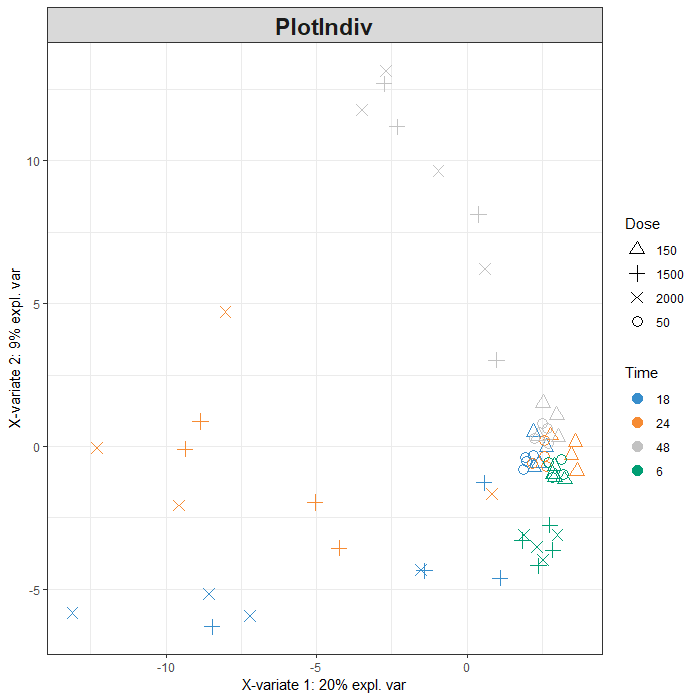 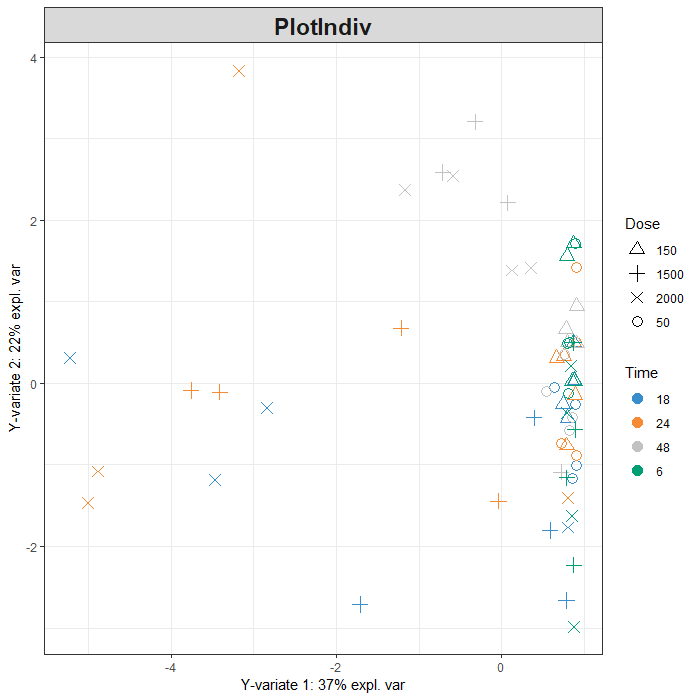 FIGURE 5: Sample plot for sPLS2 performed on the liver.toxicity data. Samples are projected into the space spanned by the components associated to each data set (or block). 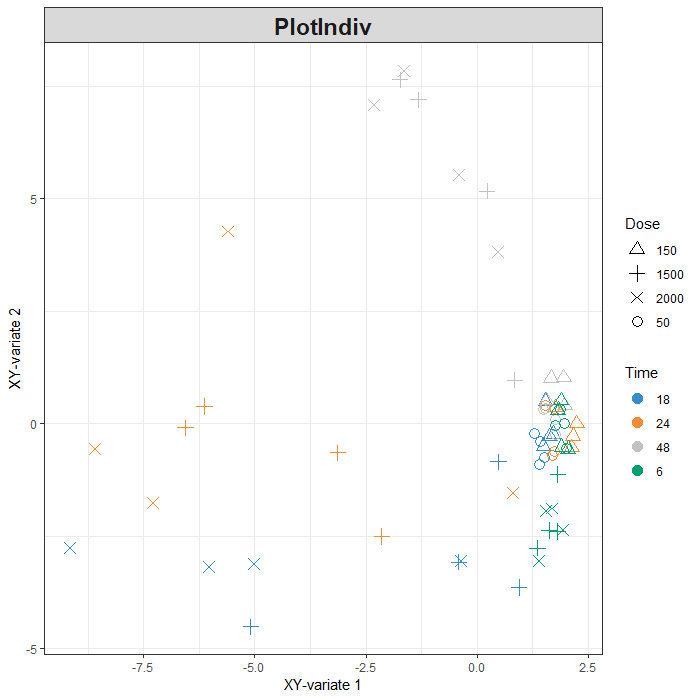 FIGURE 6: Sample plot for sPLS2 performed on the liver.toxicity data. Samples are projected into the space spanned by the averaged components of both datasets.

The plots can also be represented in 3D using style = '3d', as seen in Figure 7.

FIGURE 7: 3D sample plot for sPLS2 performed on the liver.toxicity data. Samples are projected into the space spanned by the averaged components of both datasets.

The plotArrow() option is useful in this context to visualise the level of agreement between data sets. It can be seen in Figure 8 that specific groups of samples seem to be located far apart from one data set to the other, indicating a potential discrepancy between the information extracted. 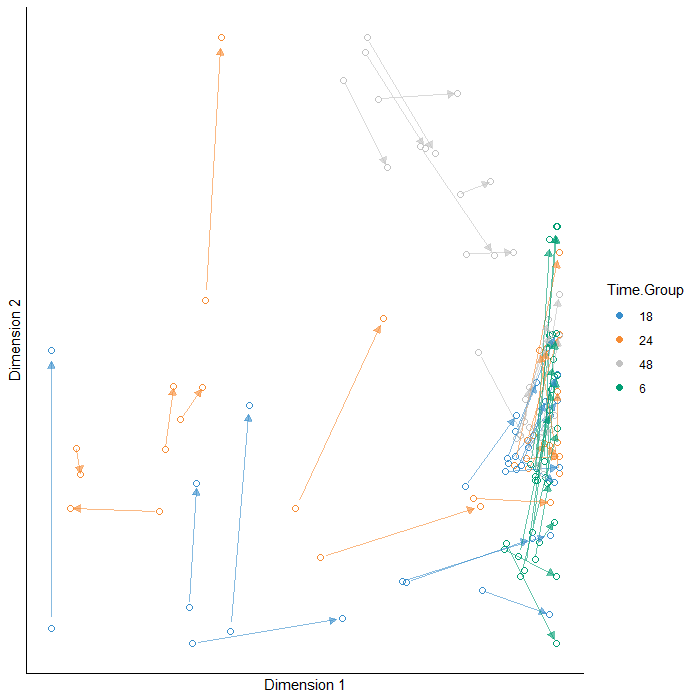 The stability of a given feature is defined as the proportion of cross validation folds (across repeats) where it was selected for to be used for a given component. Stability values (for the X component) can be extracted via perf.spls.liver$features$stability.X. Figure 9(a) and (b) depict these stabilities as histograms for the first two components respectively. Both components use the same set of features fairly consistently across repeated folds, meaning the variance of the data can be attributed to a specific set of features. The first component displays this quality much more than the second. 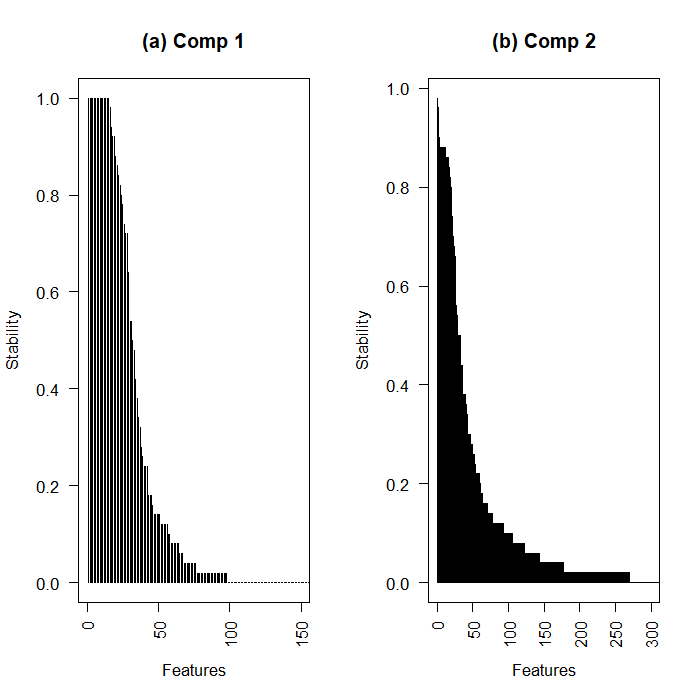 FIGURE 9: Stability of variable selection from the sPLS on the Liver Toxicity gene expression data. The barplot represents the frequency of selection across repeated CV folds for each selected gene for component 1 (a) and 2 (b).

The relationship between the features and components can be explored using a correlation circle plot. This highlights the contributing variables that together explain the covariance between the two datasets. Specific subsets of molecules can be further investigated. Figure 10 shows the correlations between selected genes (names not shown), between selected clinical parameters and the relationship between sets of genes and certain clinical parameters. 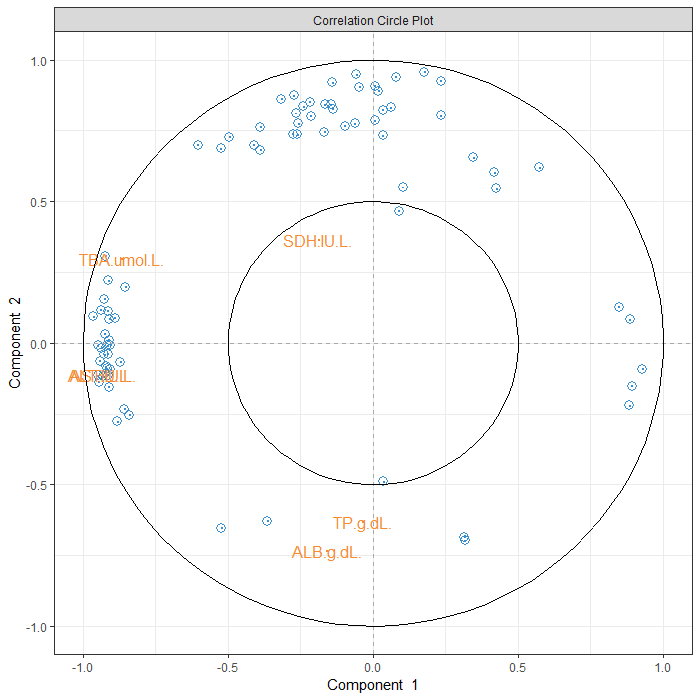 FIGURE 10: Correlation circle plot from the sPLS2 performed on the liver.toxicity data. This plot should be interpreted in relation to Figure 5 to better understand how the expression levels of these molecules may characterise specific sample groups.

A complementary tool to aid in understanding the correlation structure between variables is the Relevance Network plot. Figure 11 shows this network plot. Only the used variables are shown, further selected by the cutoff parameter. Rstudio sometimes struggles with the margin size of this plot, hence either launch X11() prior to plotting the network, or use the arguments save and name.save as shown below. 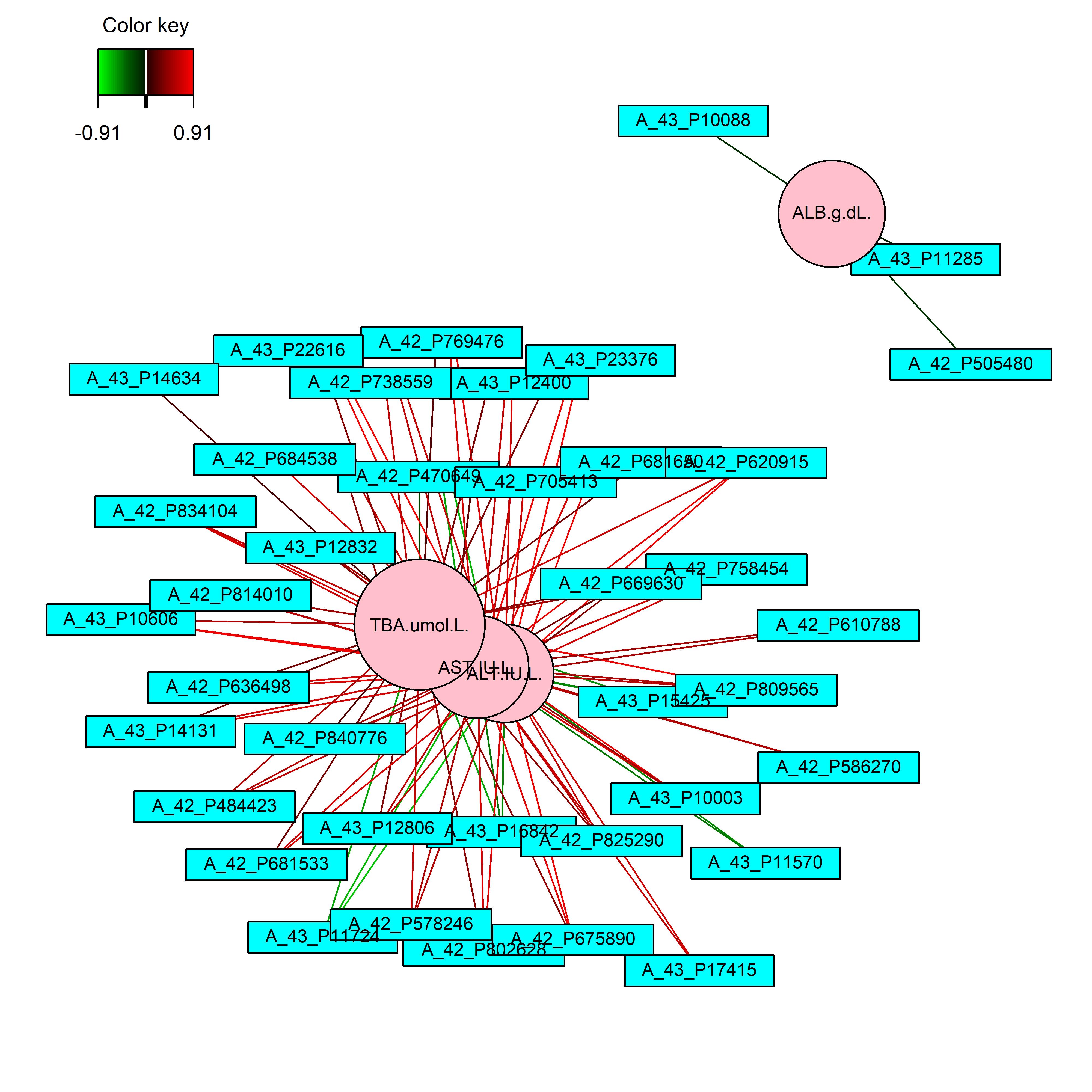 FIGURE 11: Network representation from the sPLS2 performed on the liver.toxicity data. The networks are bipartite, where each edge links a gene (rectangle) to a clinical variable (circle) node, according to a similarity matrix.

Another complementary plot used for exploration of feature structure in sPLS is the Cluster Image Map (CIM). The same technique of using the X11() function or save/save.name parameters may be required here too. Figure 12 shows that the clinical variables can be separated into three clusters, each of them either positively or negatively associated with two groups of genes. This is similar to what we have observed in Figure 11. The large red cluster corresponds to the largest substructure in the network while the large blue cluster was not depicted in Figure 11 due to the use of the cutoff parameter.

FIGURE 12: Clustered Image Map from the sPLS2 performed on the liver.toxicity data. The plot displays the similarity values between the **X** and **Y** variables selected across two dimensions, and clustered with a complete Euclidean distance method.