The mixMC framework is one that is specifically built for microbial datasets and will be used here on the Koren Bodysite dataset yielded by Koren et al, 2011 [1]. A sPLS-DA methodology will be employed in order to predict the bodysite a given sample was drawn from based on the OTU data (Operational Taxonomic Unit). The model will select the optimal set of OTUs to perform this prediction.

The Koren bodysite dataset derives from an examination of the link between oral, gut and plaque microbial communities in patients with atherosclerosis (vs. controls). While the original methodology of this study involved repeated measures, for the sake of simplicity it will be considered as non-repeated for this case study. It is assumed that the data are offset and pre-filtered, as described in mixMC pre-processing steps.

The raw OTU data will be used as predictors (X dataframe) for the bodysite (Y vector). The dimensions of the predictors is confirmed and the distribution of the response vector is observed.

The first exploratory step involves using PCA (unsupervised analysis) to observe the general structure and clustering of the data to aid in later analysis. As this data are compositional by nature, a centered log ratio (CLR) transformation needs to be undergone in order to reduce the likelihood of spurious results. This can be done by using the logratio parameter in the PCA function.

Here, a PCA with a sufficiently large number of components (ncomp = 10) is generated to choose the final reduced dimension of the model. Using the 'elbow method' in Figure 1, it seems that two components will be more than sufficient for a PCA model.

FIGURE 1: Bar plot of the proportion of explained variance by each principal component yielded from a PCA.

Below, the samples can be seen projected onto the first two Principal Components (Figure 2). The separation of each bodysite can be clearly seen, even just across these two components (account for a total of 37% of the OTU variation). It seems that the first component is very good at defining the arterial plaque bodysite against the other two bodysites while the second discriminates between the saliva and stool bodysites very well.

FIGURE 2: Sample plots from PCA performed on the Koren OTU data. Samples are projected into the space spanned by the first two components.

The mixMC framework uses the sPLS-DA multivariate analysis from mixOmics [3]. Hence, the next step involves generating a basic PLS-DA model such that it can be tuned and then evaluated. In many cases, the maximum number of components needed is k-1 where k is the number of categories within the outcome vector (y) – which in this case is 3. Once again, the logratio parameter is used here to ensure that the OTU data are transformed into an Euclidean space.

To set a baseline from which to compare a tuned model, the performance of the basic model is assessed via the perf() function. Here, a 5-fold, 10-repeat design is utilised. To obtain a more reliable estimation of the error rate, the number of repeats should be increased (between 50 to 100). Figure 3 shows the error rate as more components are added to the model (for all three distance metrics). The Balanced Error Rate (BER) is more appropriate to use here due to the unbalanced response vector (arterial plaque has less samples than the other two bodysites). Across all three distance metrics, a model using three components had the lowest error rate. Hence, it seems that three components is appropriate.

FIGURE 3: Classification error rates for the basic sPLS-DA model on the Koren OTU data. Includes the standard and balanced error rates across all three distance metrics.

With the suggestion that ncomp = 3 is the optimal choice, the number of features to use for each of these components needs to be determined (keepX). This will be done via the tune.splsda() function. Again, a 5-fold, 10-repeat cross validation process is used but in reality these values should be higher. Figure 4 below shows that the error rate is minimised when 2 components are included in the sPLS-DA, whereas the third component seems to add noise. The diamonds indicate the optimal keepX variables to select on each component based on the balanced error rate.

Note that the selected ncomp from the tune.splsda() and perf() functions are different. As the sparse model (sPLS-DA) will be used, ncomp = 2 is the more appropriate choice.

FIGURE 4: Tuning keepX for the sPLS-DA performed on the Koren OTU data. Each coloured line represents the balanced error rate (y-axis) per component across all tested keepX values (x-axis) with the standard deviation based on the repeated cross-validation folds.

Following this tuning, the final sPLS-DA model can be constructed using these optimised values.

The sample plot found in Figure 5 depicts the projection of the samples onto the first two components of the sPLS-DA model. There is distinct separation of each bodysite as shown by the lack of any overlap of the 95% confidence ellipses.

FIGURE 5: Sample plots from sPLS-DA performed on the Koren OTU data. Samples are projected into the space spanned by the first two components.

Another way to visualise the similarity of samples is through the use of a clustered image map (CIM). Figure 6 clearly shows which OTUs are associated with a given bodysite. This plot also depicts the sparsity commonly seen in microbial datasets. 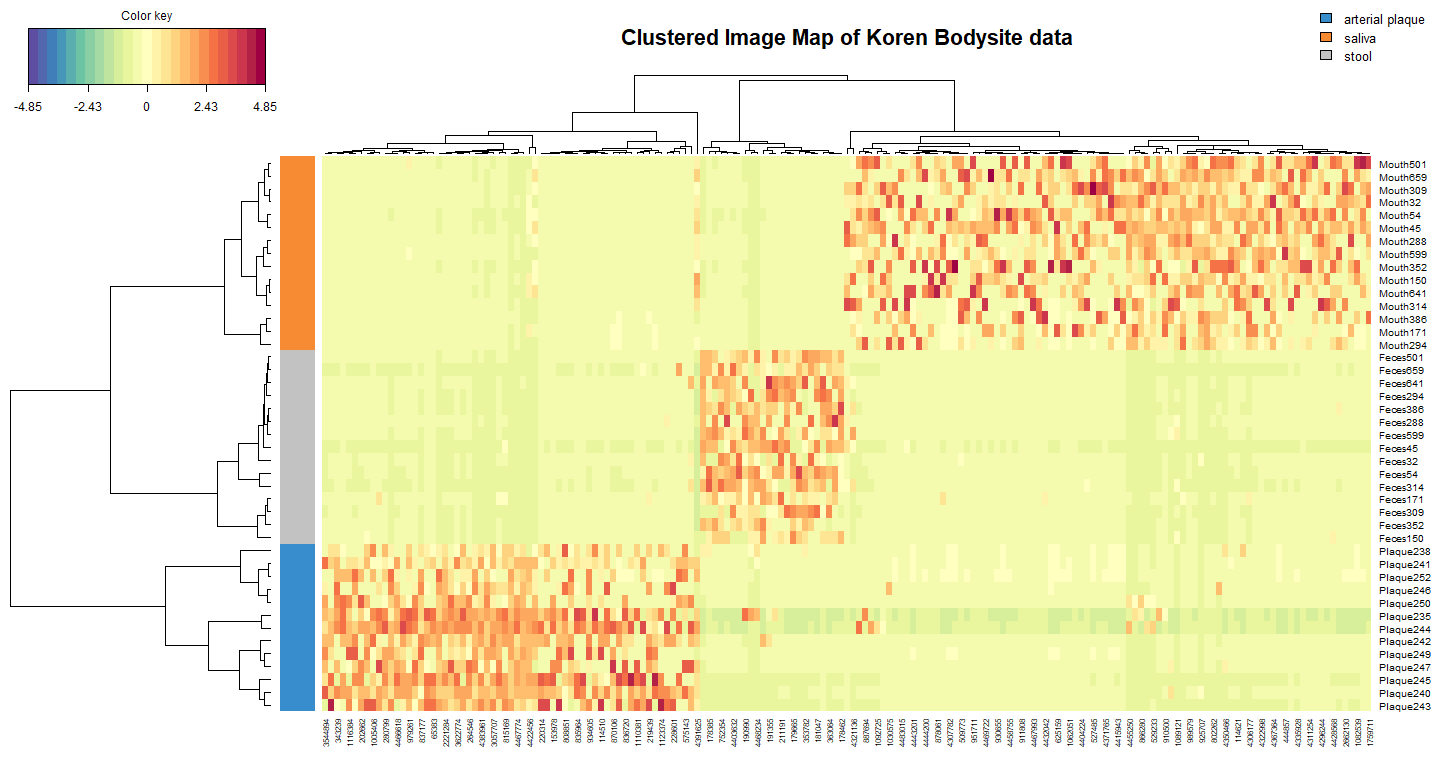 FIGURE 6: Clsutered Image Map of the Koren OTU data after sPLS-DA modelling. Only the keepX selected feature for components 1 and 2 are shown, with the colour of each cell depicting the raw OTU value after a CLR transformation.

Interpretting Figure 7 below in conjunction with Figure 5 provides key insights into what OTUs are responsible for identifying each bodysite. Note that cutoff = 0.7 such that any feature with a vector length less than 0.7 is not shown. Three distinct clusters of OTUs can be seen – one of each seemingly corresponding to one of the three bodysites. The feature found by itself (4391625) could be interpretted as either:

The network plot seen in Figure 8 shows furthers the understanding of which OTUs are contributing to each bodysite. For each bodysite, there is a grouping of OTUs which identify that bodysite and none other. There are also two small clusters which contain OTUs which are found at two of the three bodysites, showing a similarity in the microbial communities of these areas. Interestingly, the saliva and arterial plaque bodysites share no common OTUs (at cutoff = 0.5). 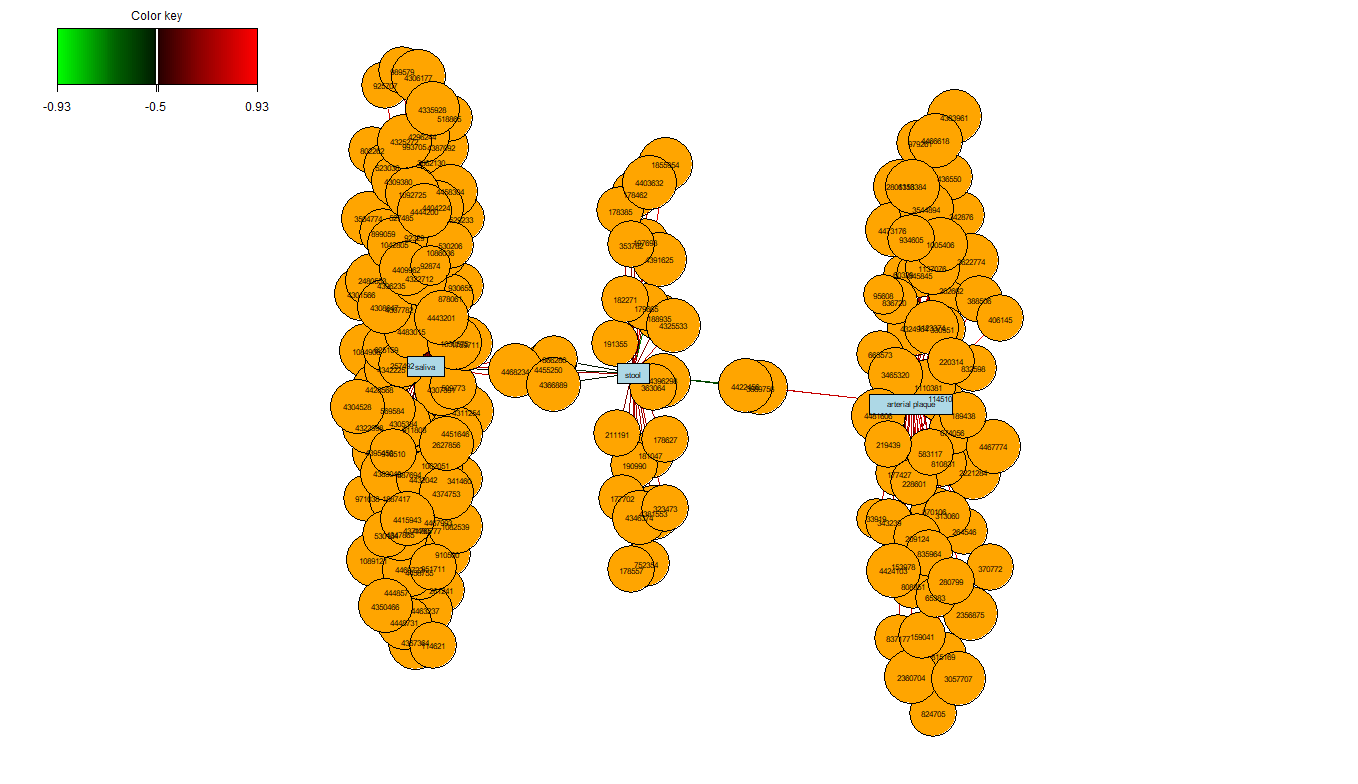 FIGURE 8: Relevance Network graph of the Koren OTUs selected by sPLS-DA on this dataset.

The mixOmics package also contains the ability to assess the classification performance of the sPLS-DA model that was constructed via the perf() function once again. The mean error rates per component and the type of distance are output. It can be beneficial to increase the number of repeats for more accurate estimations. It is clear from the below output that adding the second component drastically decreases the error rate.

The sPLS-DA selects the most discriminative OTUs that best characterize each body site. The below loading plots (Figures 9a&b) display the abundance of each OTU and in which body site they are the most abundant for each sPLS-DA component. Viewing these bar plots in combination with Figures 5 and 7 aid in understanding the similarity between bodysites. For both components, the 20 highest contributing features are depicted.

FIGURE 9: The loading values of the top 20 contributing OTUs to the first (a) and second (b) components of a sPLS-DA undergone on the Koren OTU dataset. Each bar is coloured based on which bodysite had the maximum, mean value of that OTU.

To take this a step further, the stability of each OTU on these components can be assessed via the output of the perf() function. The below values (between 0 and 1) indicate the proportion of models (during the repeated cross validation) that used that given OTU as a contributor to the first sPLS-DA component. Those with high stabilities are likely to be the most important to defining a certain component.