Canonical Correlation Analysis (CCA) and its regularised counterpart (rCCA) are multivariate, integrative methods used to analyse the correlation structure between two datasets. While similar to PLS, it looks to maximise the correlation between canonical variates in order to reduce dimensionality.

For background information on the rCCA method, refer to the CCA Methods Page.

A good stepping off place is to look at the raw correlations between the total set of features (both inter-dataset and intra-dataset). The heatmap in Figure 1 utilises the imgCor() function. This image provides a good insight into the correlation structure of each data set both together but also separately (indicated by the purple (X) and green (Y) rectangles). The color key indicates the range of negative (blue) to positive (red) correlations. For example, the genetic expression data features are largely positively correlated with one another, while the correlations between the two datasets are fairly variable in magnitude and direction.

FIGURE 1: Cross-correlation matrix in the nutrimouse study between the gene and lipid data sets. Note that the representation is symmetrical around the diagonal, so we only need to interpret the upper or lower side of this plot.

Unlike the other methods in the mixOmics package, there is actually no need to form a basic model for tuning. Optimisation (in the form of regularisation) is done externally using the tune.rcc() function or within the rcc() function.

The regularisation method can be selected based on the dataset sizes and available time. Using the ridge method can be long and costly on large datasets, but takes into account the cross-correlations between the datasets. This method requires the usage of the tune.rcc() function to optimise \(\lambda1\) and \(\lambda2\).

Utilising the shrinkage method will save time and is implemented within the rcc() function. This is much more appropriate for large-scale datasets, with the drawback that the \(\lambda1\) and \(\lambda2\) will be optimised independently of one another.

tune.rcc() will produce a heatmap that can be used to select \(\lambda1\) and \(\lambda2\), where the highest cross-validated score is desired. This can be seen in Figure 2. 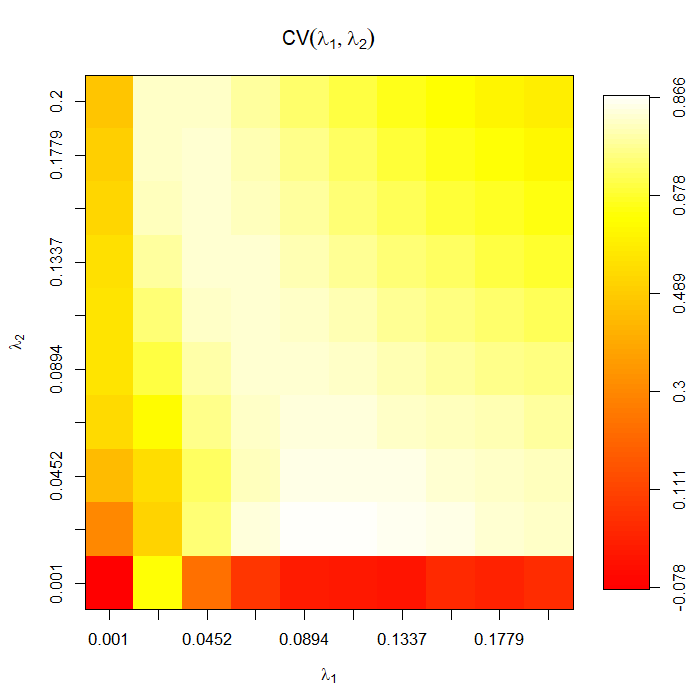 FIGURE 2: Heatmap of lambda1 and lambda2 values coloured by the resulting cross-validation score

The opt.lambda1 and opt.lambda2 components can be used to directly select the best parameter choice from the output of tune.rcc, as follows:

This method is integrated within the rcc() function, therefore does not require the use of tune.rcc(). The exact tuned values of \(\lambda1\), \(\lambda2\) can be extracted through the $lambda component of the rcc object.

Barplots for each regularisation method is shown below in Figure 3. While less explicit in the shrinkage method plot, a choice of three dimensions would be appropriate in each case. 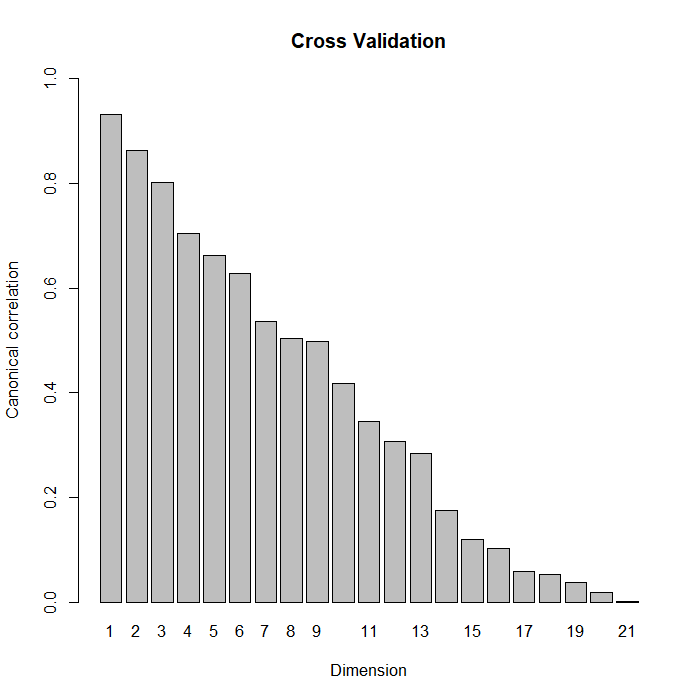 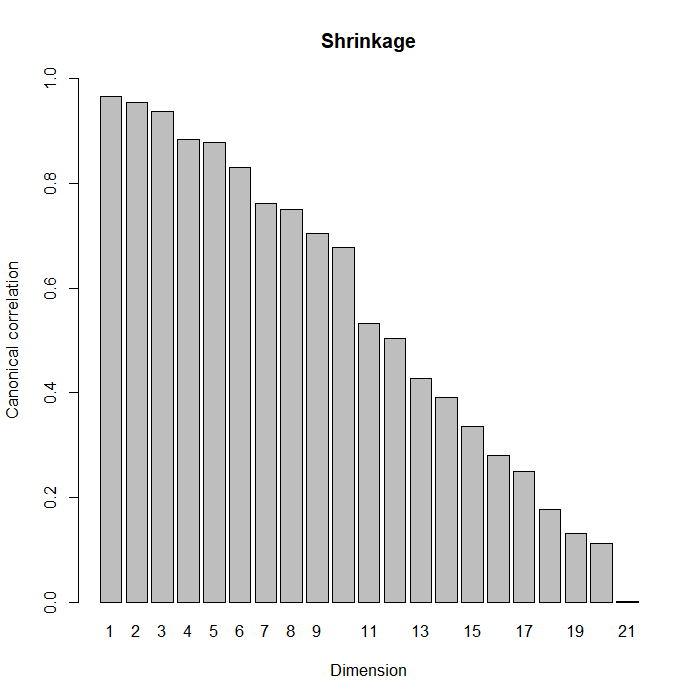 The two models generated above are both adequate. However, in the case of the ridge method it is recommended to repeat the tuning step multiple times, increasing the resolution of tested lambda values to reach an optimum.

rCCA is an unsupervised approach that focuses on maximising the correlation between the two data sets X and Y and therefore the information about the treatments or groups is not taken into account in the analysis. In Figure 4, the different treatments are coloured to illustrate how the samples are clustered on the sample plot. Both methods' first variate seem to separate the genotype quite well (indicated by wt and ppar). The shrinkage method seems better at characterising the coc diet, but not the other types of diets. It is hard to determine qualitatively which of these plots is “better” – i.e. which method would be better to use on this data. 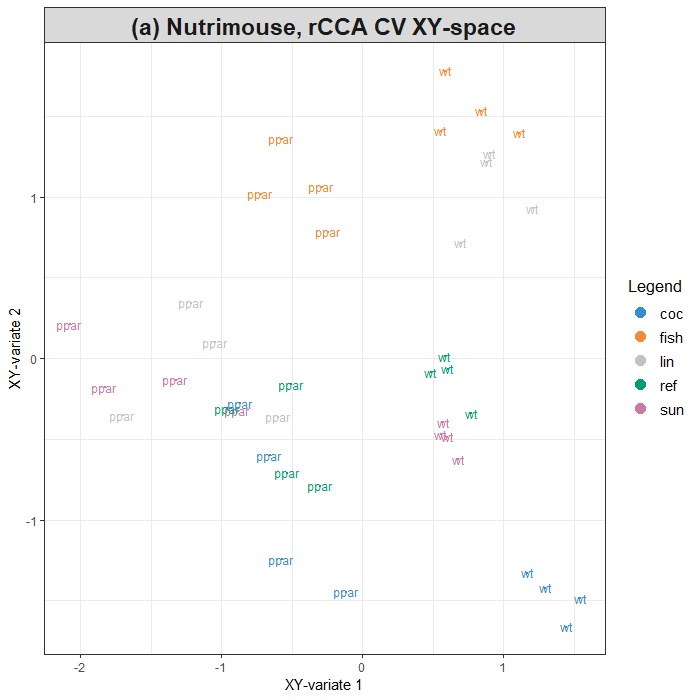 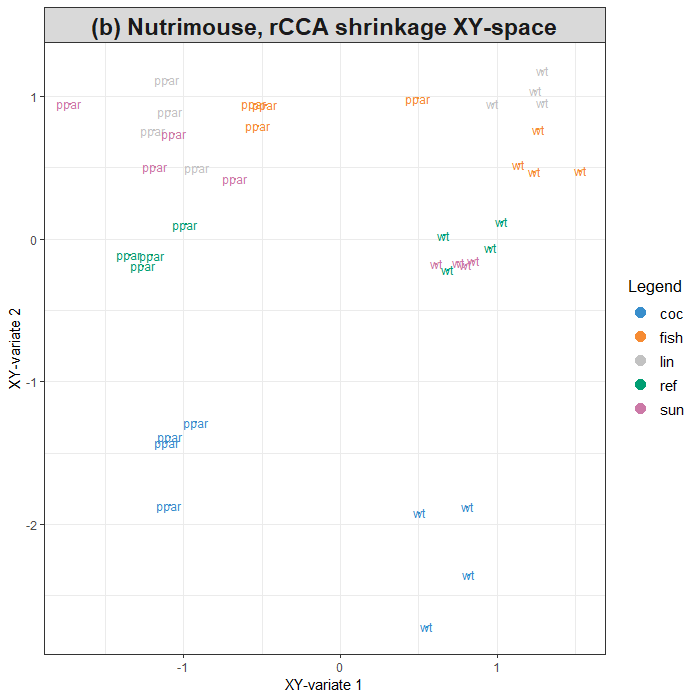 FIGURE 4: rCCA sample plots from the CV (a) or shrinkage (b) method. Canonical variates corresponding to each data set are first averaged using the argument rep.space = ‘XY-variate’. Samples are projected into the space spanned by the averaged canonical variates and coloured according to genotype information.

The next sample plot to utilise is the arrow plot. From this, the relation between each sample's projection into each dataset's variate space can be evaluated. The start of each arrow represents the sample's position in the space spanned by the X variates while the tip represents its position in the Y variate space. The longer each arrow, the higher the disparity between the datasets. The shrinkage method, shown in Figure 5(b), yields variates which produce much more homogeneous sample projections, depicted by the considerably shorter average arrow length when compared with Figure 5(a). From this figure alone, it would seem that the shrinkage method is the more appropriate choice in this context. 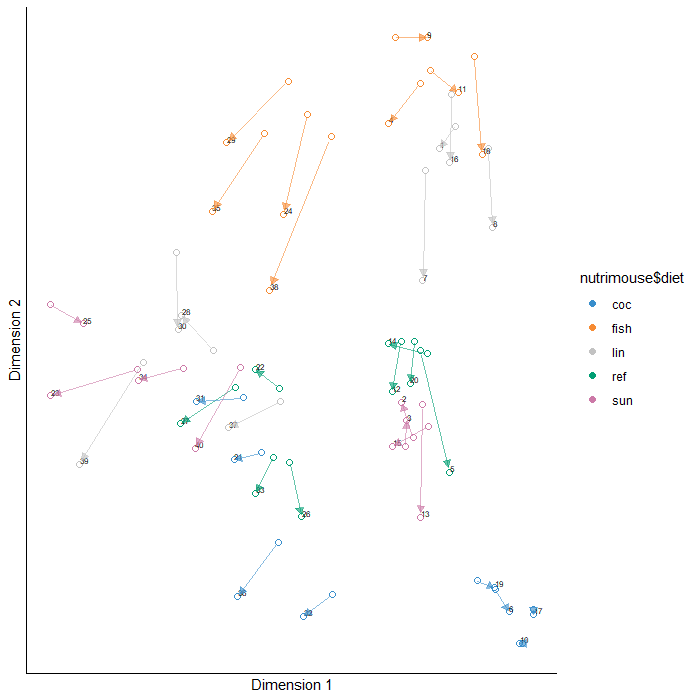 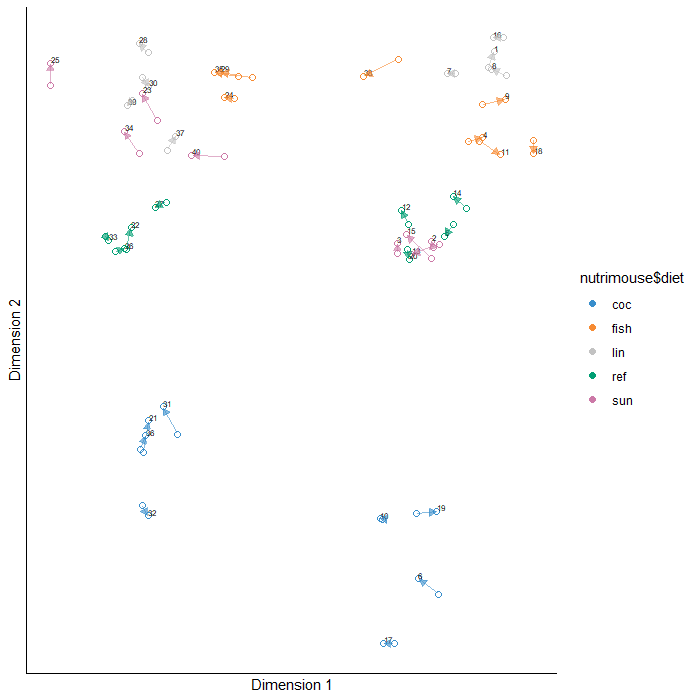 FIGURE 5: Arrow sample plots from the rCCA performed on the nutrimouse data to represent the samples projected onto the first two canonical variates. Each arrow represents one sample.

Another important step is analysing the correlation structure between features and the canonical variates. Figure 6(a) and (b) depict the correlation circle plots for the CV and shrinkage methods respectively. Each use a cutoff of 0.5 to prevent features with a negligible correlation being depicted. Figure 6 shows that the main correlations between genes and lipids appear on the first dimension, for example: GSTPi2 with C20.5n.3 and C22.6n.3 in the top right corner; THIOL and C.16.0 in the far right and CAR1, ACOTH and C.20.1n.9 in the far left of both plots. Differences in interpretation appear in the second dimension where clustering differs much more. Determining which method is appropriate is based on the biological question. For instance, if it is equally important to separate all diets, then the shrinkage method may be more useful. 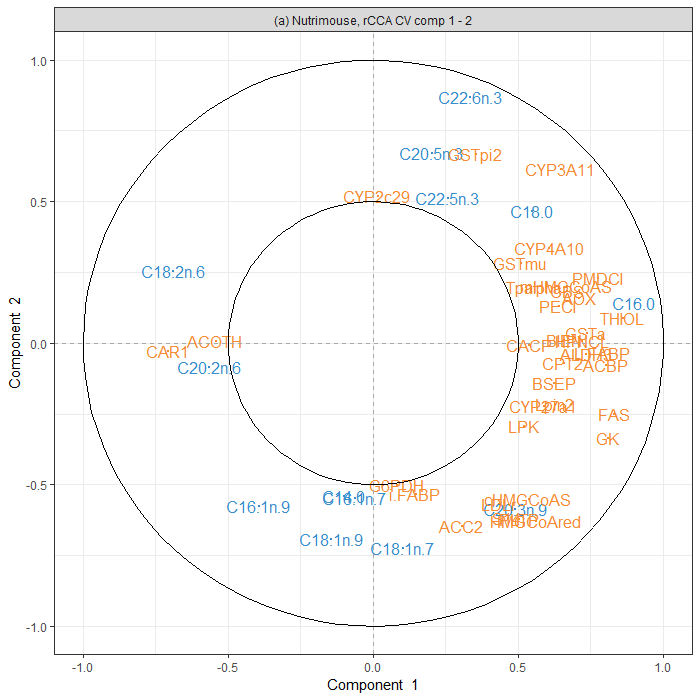 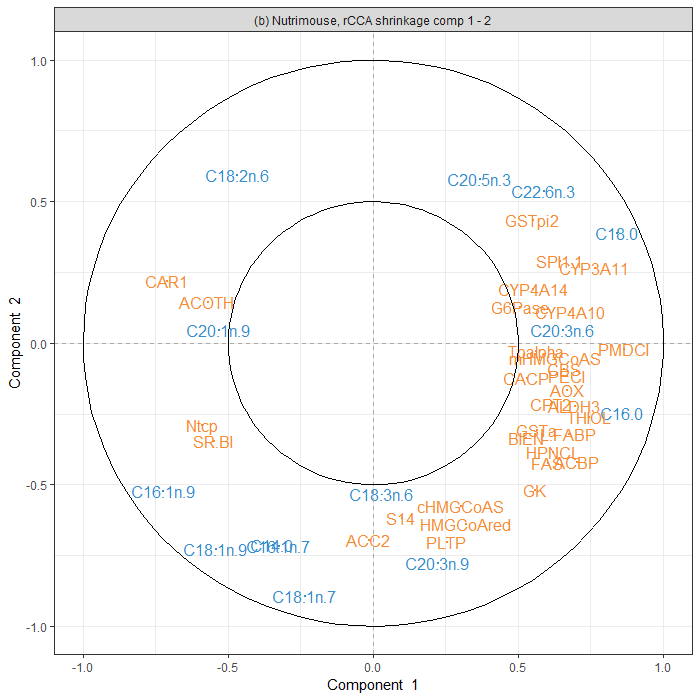 FIGURE 6: Correlation circle plots from the rCCA performed on the nutrimouse data showing the correlation between the gene expression and lipid concentration data.

A more robust way to evaluate the correlation structure is through a relevance network plot, as seen in Figure 7. The circular nodes represent genes and the rectangular nodes represent lipids. The bipartite relationships between these non-negligibly correlated features can be seen by the colour of the connecting lines (edges). Figure 7 shows that there is a reasonably complex correlation structure. However, there seems to be roughly three clusters, each corresponding to a group of three genes, a group of five genes and a single gene. The group of three genes has some negative correlations while the rest of the network seems to be positively correlated. 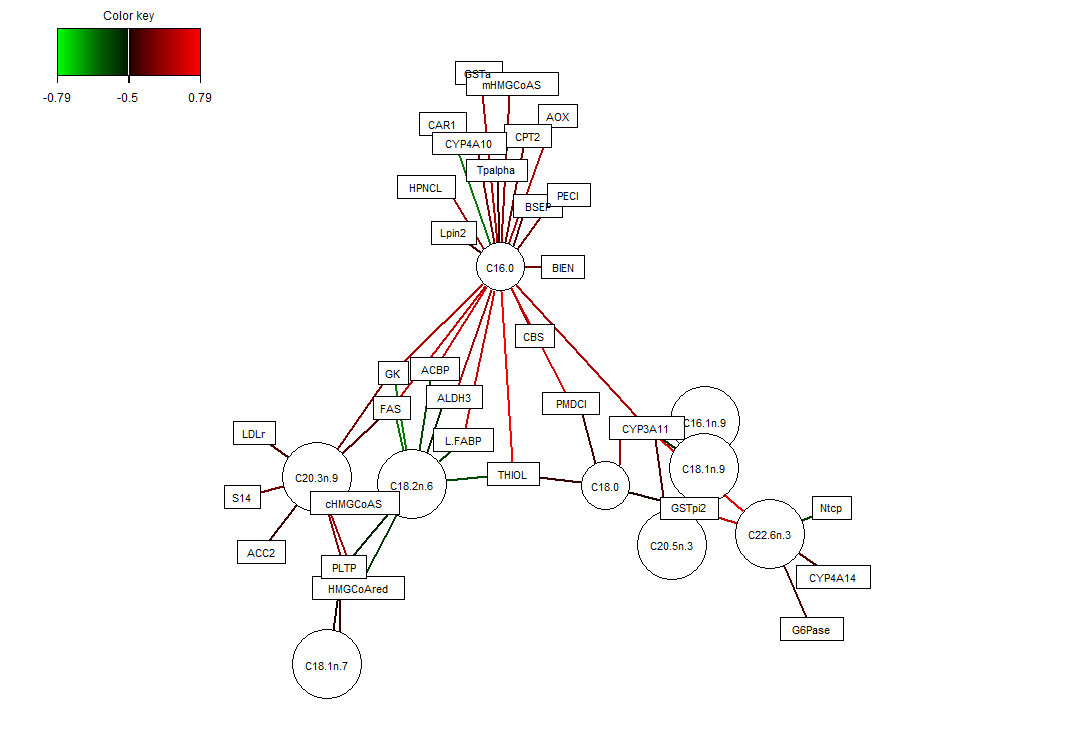 FIGURE 7: Relevance network plot from the rCCA performed on the nutrimouse data. This shows the correlation structure for all bipartite relationships with a correlation above 0.5.

To complement the network plot, a CIM can be used (Figure 8). While Figure 8 does not have a cutoff which aids in determining the number of feature clusters, the correlations seen here do reflect that seen in Figure 7 – such that there are roughly three clusters. 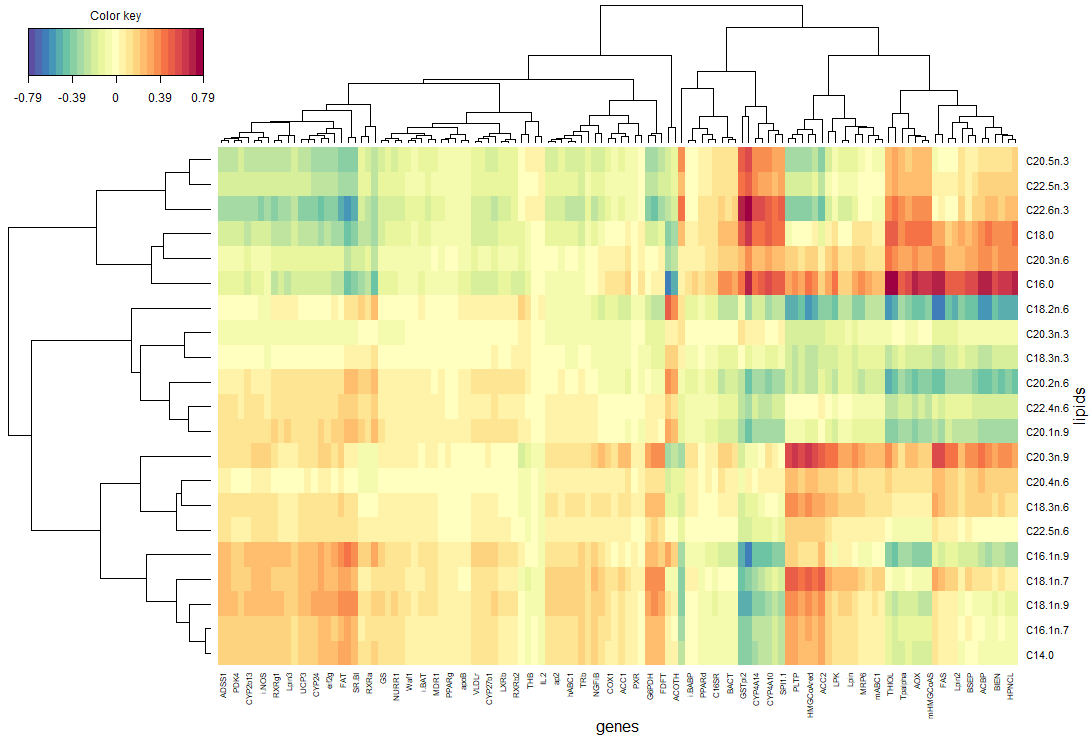 FIGURE 8: Cluster Image Map from the rCCA performed on the nutrimouse data. This shows the correlation structure for all bipartite relationships