Partial Least Squares Discriminant Analysis (PLS-DA) is a linear, multivariate model which uses the PLS algorithm to allow classification of categorically labelled data. PLS-DA seeks for components that best separate the sample groups, whilst the sparse version also selects variables that best discriminate between groups. Here, the functionality of the multilevel approach is exemplified.

For background information on the (s)PLS-DA method, refer to the PLS-DA Methods Page.

The Vac18 dataset derives from a trail which evaluated the efficacy of a vaccine against HIV-1 by measuring lipopeptides in HIV-1 negative individuals [1].

The mixOmics Vac18 dataset is accessed via vac18 and contains the following:

The dimensions of the genes dataset is first checked to determine the correct data has been extracted. As can also be seen directly below, the samples and stimulation methods are not balanced across this study. This is not an issue with the mixOmics methods.

As is good practice, a preliminary exploration of the data is undergone prior to forming sPLS-DA models. PCA assumes that all samples are independent which is not the case here. Fortunately, the mixOmics pca() and spca() methods contain multilevel functionality. The repeated measurements of the study can be accounted for via the multilevel parameter.

Below, Figure 1a depicts samples projected onto PCs that didnt use a multilevel approach while Figure 1b depicts the same samples onto PCs that used the multilevel design. Figure 1a has the samples corresponding to the same subject in close proximity of one another while Figure 1b has samples cluster more by their stimulation methods rather than subject.

As was discussed in the Multilevel page, the difference between Figure 1a and 1b is a good indicator that the multilevel approach will be useful for this data. 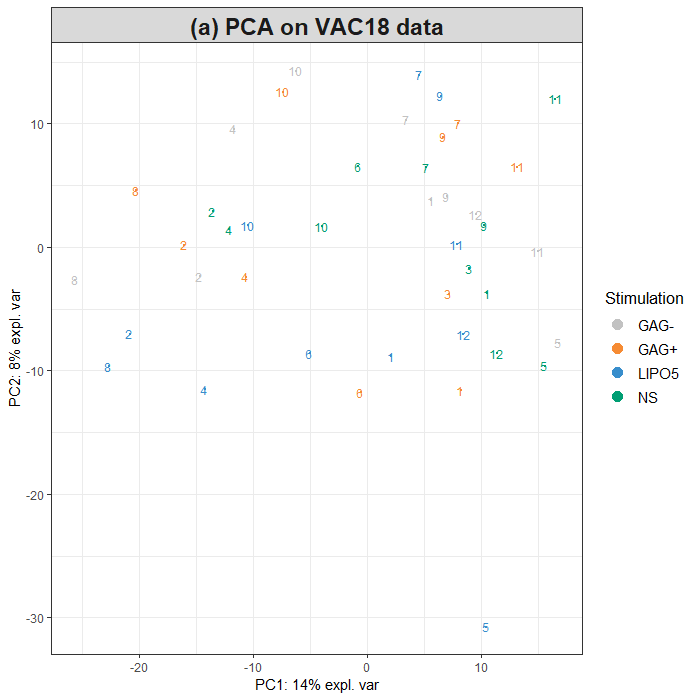 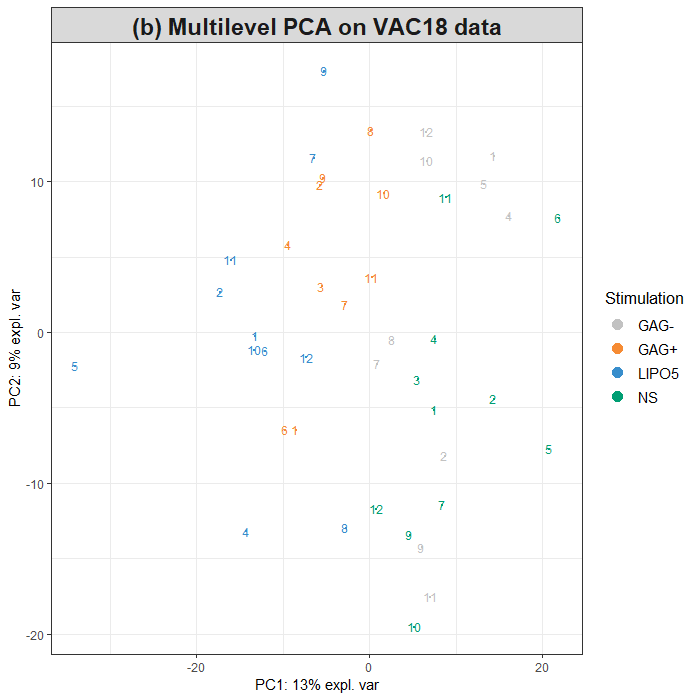 The next steps involve the tuning and optimising a basic sPLS-DA model. As this has already been covered in considerable depth, this process won't be shown explicitly here. The values of optimal.ncomp and optimal.keepX were calculated externally and loaded in (downloadable here). They can be seen below.

For more information and details on tuning the sPLS-DA method, refer to the sPLS-DA SRBCT Case Study.

The projection of the samples onto the novel components produced by the sPLS-DA algorithm can be seen in Figure 2. When comparing this to Figure 1a, there is a marked improvement in the clustering of samples according to their treatment. The LIPO5 and GAG+ groups separated very well. The use of the multilevel design allowed the inter-subject variation to be filtered out for the prioritisation of inter-treatment variation. The GAG- and NS groups are seeminly inseparable on this set of axes. Across these first two components, only 16% of the total variation is accounted for. 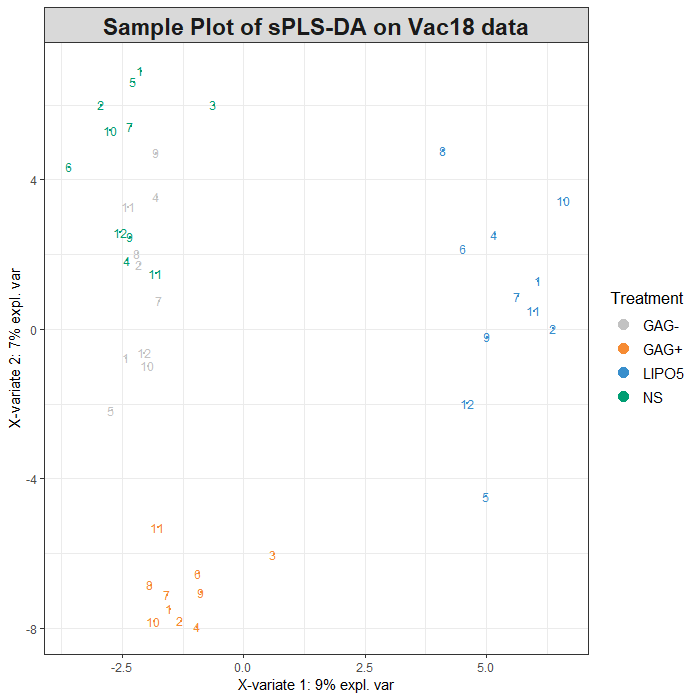 FIGURE 2: Sample plot for sPLS-DA performed on the vac18 data. Samples are projected into the space spanned by the first two components yielded by this method.

Through the use of the style parameter of this plotting function, a third axis can be depicted. This increases the total variance accounted for to 22%. In Figure 3 all four treatment groups have been separated (though this is difficult to see without being able to change the perspective).

FIGURE 3: Sample plot for sPLS-DA performed on the vac18 data. Samples are projected into the space spanned by the first three components yielded by this method.

A heatmap representation of each sample's feature values is very useful in this context. This has been visualised in Figure 4. The left-most column of colours depict the subject associated with each sample. It is of note that samples from the one subject were rarely clustered together (using hierarchical clustering) as seen in the dendrogram on the left. This once again shows how the multilevel approach avoids focusing on the inter-sample variation which usually does not yield any useful information. 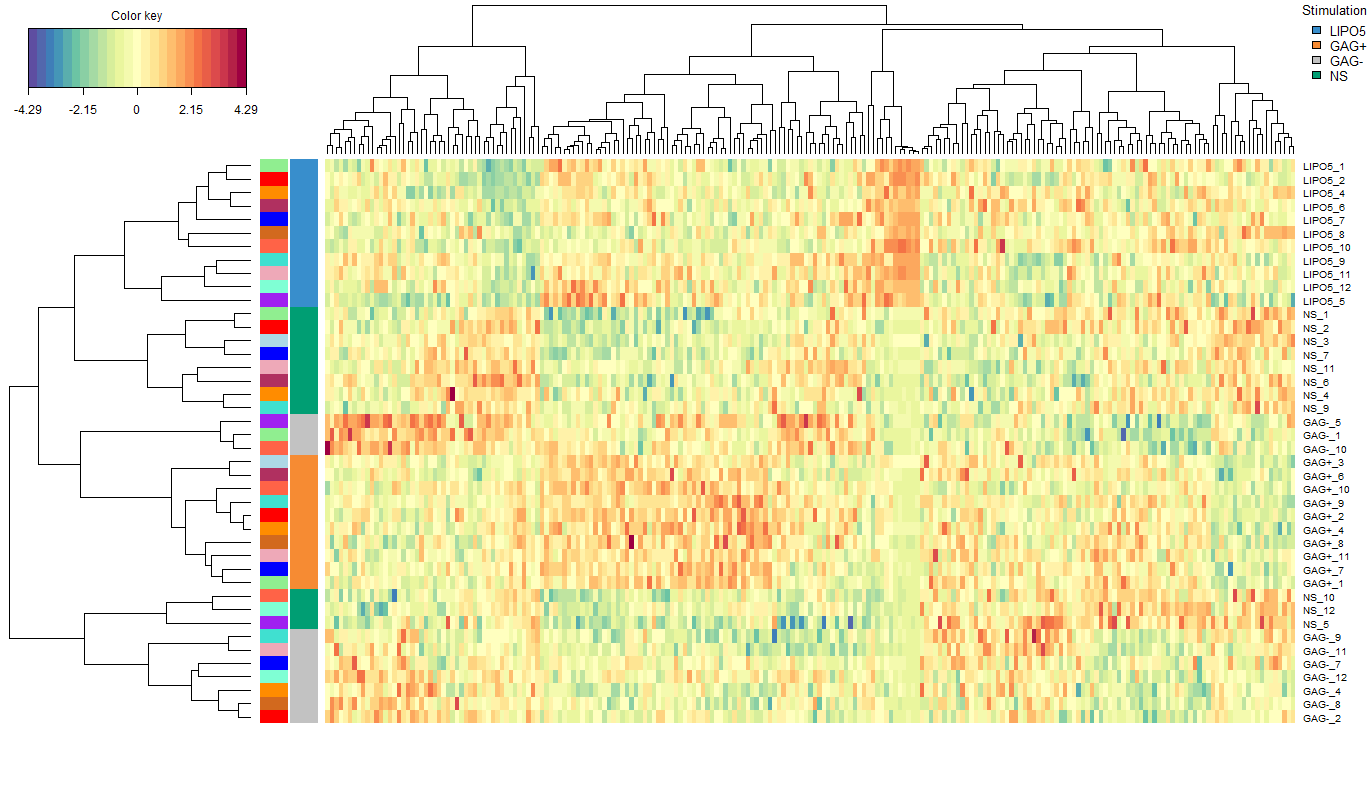 FIGURE 4: Clustered Image Map from the sPLS-DA performed on the vac18 data. The plot displays the genetic expression levels of each measured feature for each sample. Hierarchical clustering was done with a complete Euclidean distance method. The left-most column of colours denotes which subject a given sample belongs to. The colour column to the right of this shows the treatment associated with each sample.