The new patch version of mixOmics is on CRAN. It includes a few bug fixes raised by our users (thank you!) and a few improvements. Florian Rohart has been fiddling really hard with ggplot2 to make a new plotIndiv version that can beautifully handle two legends! 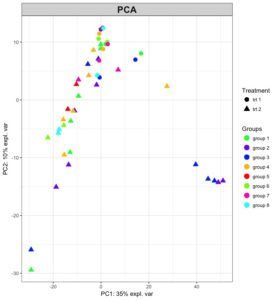 plotIndiv example with two legends in 6.1.2

Here is a list of the major bug fixes and improvements for 6.1.2:

New features:
————-
1 – tune.splsda now returns a ‘choice.ncomp’ which indicates the number of components to choose (only if nrepeat > 2, criterion based on t-tests)
2 – plotIndiv now enables two legends based on color, as well as pch, when pch is a factor different from what is indicated in group (use arguments pch and pch.levels, see ?plotIndiv)

Bug fixes:
———-
– directionality is now enforced in AUROC (results lower than 0.5 can be obtained, which would indicate a very poor model performance)

The MINT paper is out:

The mixOmics manuscript (first draft) is on bioRxiv, with sweave codes:

This entry was posted in Updates and tagged Papers. Bookmark the permalink.